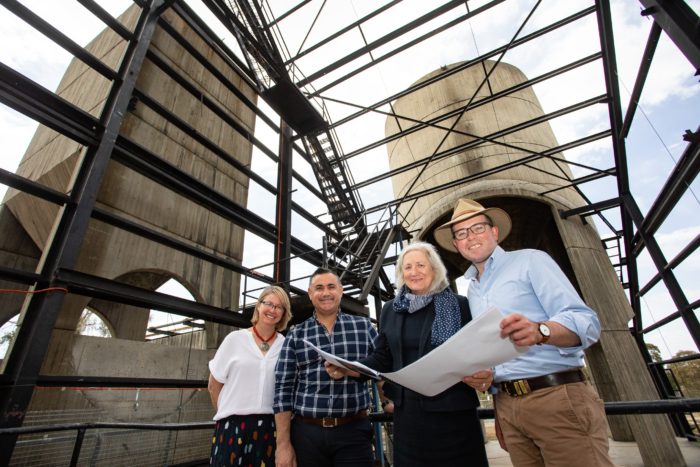 Over the past three years UNE has fully decommissioned and cleaned up the disused boilerhouse site in preparation for the exciting redevelopment, which is expected to cost close to $10 million.

“I see this state-of-the-art project as delivering our very own Questacon, right here in Armidale and the New England,” Mr Marshall said.

“The Boilerhouse project has been designed to inspire a love of learning in children from an early age and what better place for that to happen than inside this incredible building overlooking Armidale and the university.

“UNE Discovery now has the capital to start fitting out this incredible piece of industrial architecture with the latest climbing frames, technological wonders and immersive experiences.

“The Boilerhouse Project will enhance the Armidale’s standing as an education destination bringing economic benefits to the entire region.”

Mr Bailaro said the NSW Government backed projects like this so that people living in regional NSW have access to the same quality facilities as those living in the cities.

“The UNE Boilerhouse project will give regional kids somewhere to learn and grow in a state-of-the-art educational environment right in the heart of Armidale,” Mr Barilaro said.

“Today’s announcement of $6.128 million will deliver a unique educational experience, not just for UNE, but the entire region as school tours, families and day trippers make their way to the region.”

UNE Vice-Chancellor Professor Heywood said the Boilerhouse Project was an exciting component in the existing Discovery Precinct which would provide educational experiences for young people.

“The Boilerhouse project has been designed to inspire a love of learning in children from an early age,” Professor Heywood said.

“Our dream is to provide educational tourism to visitors from far and wide with an experience which sparks their curiosity, grows their confidence and ignites their imagination.

“UNE has the opportunity to provide all the building blocks for state-of-the-art immersive facilities that are enabling rural and remote communities with expertise in science, technology, engineering, arts and mathematics.”

UNE Discovery Leader Dr Kirsti Abbott added there was no facility akin to the Boilerhouse Project in northern NSW which encouraged children at an early age to problem solve through innovation and play.

“UNE Discovery has worked hard to retain the historical aspects of the building and incorporating its industrial design into play pieces like climbing frames,” Dr Abbott said.

“I thank Adam and the State Government their support in re-purposing this beautiful old building.”