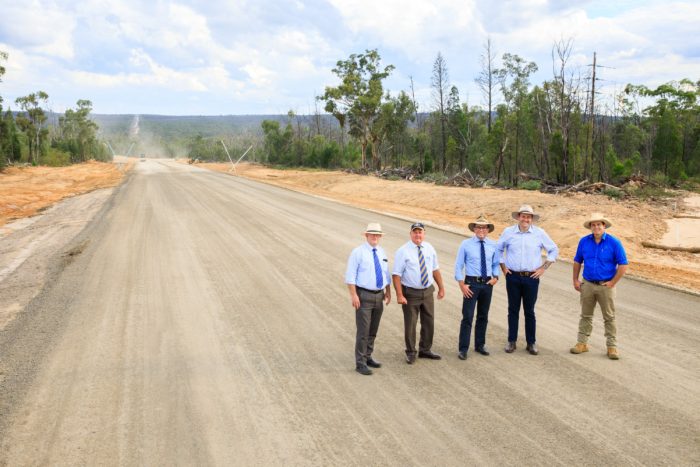 AFTER years of meticulous planning and construction the $6.5 million Warialda High Productivity Bypass is only weeks away from having the first trucks travel along it.

The 4.1 kilometre bypass will take heavy vehicles from the north of Warialda along a new route to the east of the township, over a new bridge on Warialda Creek and onto the Gwydir Highway.

The project resolves a road freight pinch-point at the intersection of Stephen Street in Warialda and the Gwydir Highway, which B-doubles cannot negotiate without crossing the centreline of both roads and road trains are unable to traverse at all.

“Construction started on the heavy vehicle bypass in 2018 and despite a number of significant setbacks – the drought, flooding and COVID-19 pandemic – Gwydir Shire Council’s perseverance and hard work has paid off,” Mr Marshall said.

“Earthworks were officially finished at the start of March, with council then forming the bypass’ sub-base layer using imported granite.

“Once the granite was compacted and stabilised, a crushed basalt road base was laid in preparation for the asphalt seal and line marking.

“The bypass is so close to being finished and I look forward to it being officially being open and delivering improved safety and efficiencies to our freight and agriculture sectors.”

Gwydir Shire Mayor John Coulton said the works would not only ease the congestion on our local road network but will also see a productivity gain for the trucking industry.

“The cost benefit ratio conducted for this project indicates that the heavy vehicle industry in the region is set to significantly benefit from the project which is great news for all involved,” Cr Coulton said.

“The official opening of the project will take place on Thursday, 5 May, this means motorists will soon have access to the wonderful new asset in the Gwydir Shire.”

Mr Marshall said the amount of earthmoving done over the life of the project was incredible.

“To establish the route of the bypass, 55,000 cubic metres of material, including rock and vegetation, had to be cut away,” he said.

“A portion of what was removed was used to build noise abatement banks on the Warialda side of the roadway.

“This has been a huge project for a small council to undertake alongside its regular road maintenance program. I congratulate all involved for the professionalism and expertise they have put into making this important piece of infrastructure a reality.”