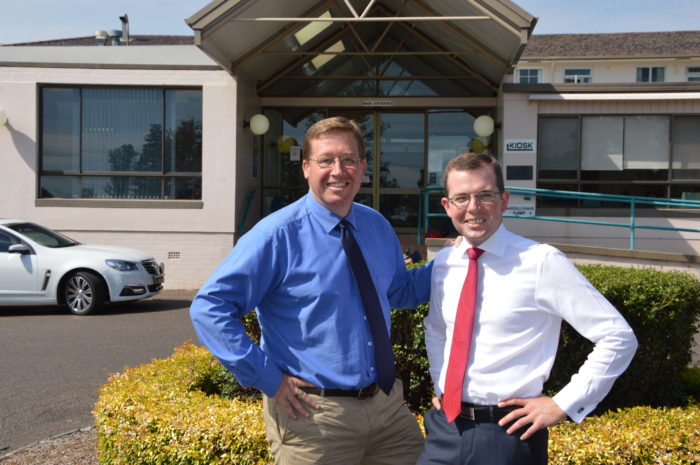 Mr Grant said the upgrade of Armidale Hospital was much-needed and would begin if the Baird Government was re-elected.

“Adam Marshall has fought tirelessly for the doctors, nurses, patients and community here in Armidale to deliver this hospital upgrade,” Mr Grant said.

“We are building the hospitals that Labor promised and failed to deliver over the 16 years they had in government,” Mrs Skinner said.

“In just four years we have delivered health upgrades from Bega to Lismore, Parkes to Port Macquarie, Tamworth to Byron Bay and Wollongong to Wagga Wagga – hospital redevelopments are underway right across rural and regional NSW.

“Acute patient activity at Armidale Hospital is projected to increase by 15 per cent by 2021. We want this hospital to be able to care for its community for decades to come, which is why its major upgrade is so important” Mrs Skinner said.

Mr Marshall welcomed the announcement, declaring it a “red letter day” for the region, following many months of tireless campaigning alongside members of the community.

“I am absolutely thrilled for our community and the broader region,” he said.

“This redevelopment will transform health care in Armidale and the Northern Tablelands and contribute greatly to the training and retention of clinicians in the region.

“This funding demonstrates the government’s commitment to the people of the Northern Tablelands. There is not a person in our community who doesn’t recognise the need for Armidale Hospital to be redeveloped to meet our future health needs.

“The upgrade of Armidale Hospital is about more than bricks and mortar. It will attract quality health staff to live and work in our region and ensure our hard-working doctors, nurses and others have a workplace they can be proud of.

“I’m delighted the government has heard our call and is committed to the major upgrade of Armidale Hospital. This is a project that will bring our hospital and health care into the 21st century.”