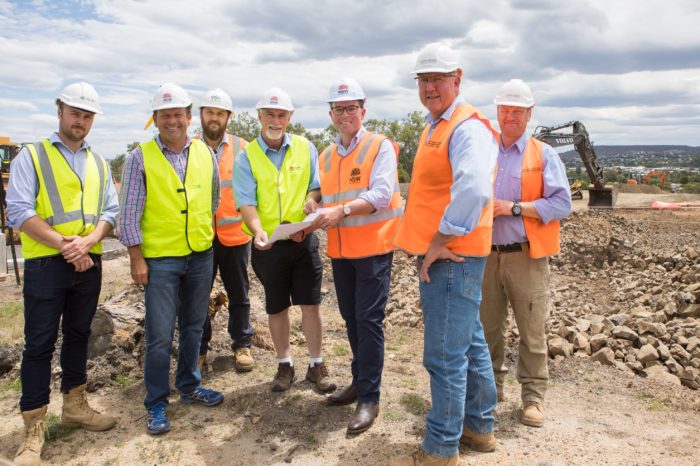 THREE months after turning the first sod of soil on the historic redevelopment of Inverell District Hospital, Northern Tablelands MP Adam Marshall was back onsite earlier this week, inspecting construction progress on the first stage of the massive $60 million project.

Mr Marshall was joined by Mayor Paul Harmon to walk through the construction site, where more than 7,000 tonnes of rock and soil has already been excavated to level off the area for the new hospital building. He said the project was right on schedule.

“I am so thrilled to see works progressing so quickly,” Mr Marshall said.

“Everything is on schedule and the work crew is expecting to be slightly ahead on the project by Christmas, with the pouring of the first foundation concrete slab.

“It’s amazing that while we have a huge construction site right behind the exciting hospital, nothing has impacted the hospital’s operations or patients – it’s a credit to the planning staff and the construction crews.”

Mr Marshall said so far many old existing buildings had been demolished and substantial progress had been made on the building footprint with more than half the levels completed already.

He was particularly pleased that so far 12 local businesses were involved in the project, with more to come on board once the new hospital building construction starts.

“With such a large project, I was focussed on keeping as much of the money for the new hospital in Inverell, so local tradies and businesses would have the chance to tender and quote for work,” Mr Marshall said.

“The State Government has also mandated that 20 per cent of all workers on the site must be apprentices to up-skill our local young people.”

Mr Marshall declared the project “momentous” for the Inverell district.

“Many doubted we would ever get to this day after years and years of campaigning for this much-needed health project, but it’s now happening right before our eyes,” he said.

“It has been a tough slog at times to get this point and more than a few times many thought we would never get to this day, so it is incredibly exciting for everyone involved and the Inverell community.”

The $30 million second stage of the redevelopment, secured in this year’s NSW Budget, is also being designed by NSW Health Infrastructure and Mr Marshall expects the tender to go out publicly for Stage 2 early next year.