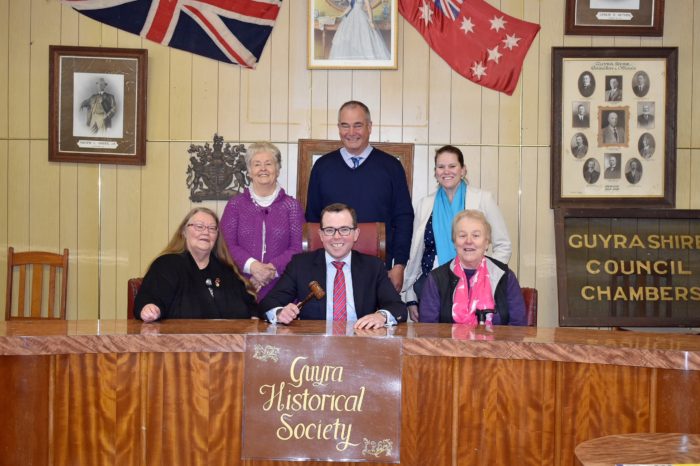 THE Guyra Historical Museum will undergo a major makeover thanks to a $60,000 cash injection from the NSW Government, Member for Northern Tablelands Adam Marshall announced today.

“It has an eclectic mix of pieces that are quite unique, including an old washing machine from 1880, a barbed wire collection, believe it or not, shearing hand pieces and First World War and Second World War memorabilia, medals and documents.

“They are fascinating finds for anyone who wants to discover the old Guyra and a sense of its cultural history.”

Mr Marshall said the full interior of the museum would be painted and some of the flooring replaced where needed to make it aesthetically more attractive but also give the museum the opportunity to display its collection in improved conditions. The funding will also provide for specialised storage, a new research space and upgrading data research tools.

“The museum has been operating there since the 1980s in the former home of the Guyra Shire Council chambers that was first built and occupied from around 1906,” Mr Marshall said.

“Already the museum committee has identified that underneath some of the old carpet there are old vinyl tiles that trace the local building heritage and might be resurrected in the refurbishment.”

“It will give us the chance to really look at each item we have on display and decide if that piece stays in its present space or can be shown off in a better display,” Mrs Weiderman said.

Long serving historical society member Dot Vickery, who has been involved with the museum since 1989, said the funding would allow members to take some of the best pieces out of their shipping container storage and go back onto the floor in the 11 rooms used for display.

“The museum in the old council chambers is a museum piece in itself but there’s a terrific history of Guyra there,” Mrs Vickery said.

She ranks as the most popular pieces a man-powered fire engine, an old theatre movie machine, the pulpit from the St Mary of the Angels Catholic Church and the 1880s washing machine.

“Most people wouldn’t even think we had washing machines back then,” she said, “but we did and we do.”

Painting of some rooms has already started courtesy of a $15,000 grant from Armidale Regional Council but the State Government funding will allow them to extend the makeover considerably.

Mr Marshall said the society hoped to have the museum renovation completed by this time next year.