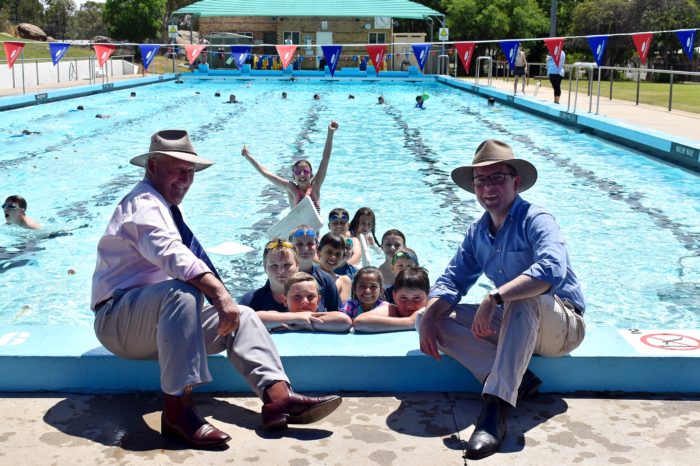 SWIMMERS in Warialda more than excited about a $60,000 project that will give them an extended swimming season at the local pool, with a big new solar hit, Northern Tablelands MP Adam Marshall announced today.

Mr Marshall delivered news of the splash of cash from the State Government through the NSW Stronger Country Communities Fund that will boost the temperature of the local pool so they can swim for longer and in water that’s more comfortable for them.

“At the moment there’s no temperature controls and at the start of the swim season and at the end, it’s pretty cold in there for swimmers but that’s about to change for the better with this project,” Mr Marshall said.

Warialda Pool manager Carl Tooley said the funding would provide for the installation of solar thermal collectors and thermal blankets that will ultimately allow for an increase in the length of the season from the start and at the end.

“It will make it much nicer to swim in all season,” Mr Tooley said.

“The temperature of the water is about 19 to 20 degrees when the pool opens in October and it’s far too cold to enjoy but with this new equipment we plan to have it at about 24 to 25 degrees by the time the pool opens and as it starts to cool down by the end we will start using the blankets to maintain that.

“Hopefully kids training with the swimming club will not freeze now when the rep season starts in February.”

Mr Marshall said the project would provide a much more comfortable environment for swimming and importantly prolong the Warialda swimming season for all users.

“The proven technology of the system and the industry standard solar collectors will bring it in line with other major pools in the north west,” Mr Marshall said.

“The Warialda pool is a 50 metre Olympic-sized pool, with a wading pool, and it is used by recreational swimmers, the swimming club, people who do regular laps, therapeutic swimmers, and also for school carnivals and by other small school groups from places like Delungra and Gravesend, so it’s going to be a major boost for them to be able to swim for longer and in water that’s more conducive for swimming.

“And because the wading pool is linked to the Olympic pool, it will get the benefit of the solar heating as well, which will obviously mean that little swimmers and parents will find it a better place to play in.”

Mr Tooley said the thermal blankets would hold the heat in while a series of panels on the roof of the amenities block, through a system of polythene piping and pumps, would pull the water out of the water plant over the roof and back into the pool, allowing for warmer water to top up cooler quantities.

“We will have about 220 square metres of solar collection,” Mr Tooley said.

“The project is really appreciated by the community and we’ve already got some very happy swimming club people waiting for it to be installed.”

He said the council was hoping to have most of the new system in place ahead of the cooler weather swimming in mid-February.