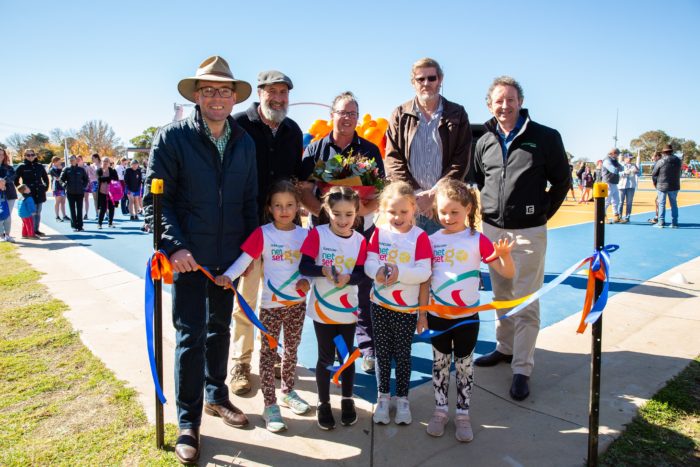 Mr Marshall said he was delighted to open the 10 upgraded courts, on the eve of the Armidale All-Age Carnival.

“Armidale District Netball is reaping the benefits only weeks after this project was complete, as over the weekend they hosted a carnival to encourage new player participation,” Mr Marshall said.

“The improved playing surface is unrecognisable to its 20 year-old predecessor, with the uneven courts smoothed and all cracks covered with a fantastic orange finish.

“Improved water run-off and drainage will lower the risk of future cracking and reduce the cost and amount of work required to maintain the Armidale Regional Council-owned facility.

“Once winter ends and the weather warms up new turf will be laid around courts 1 to 8, making the venue a more comfortable and welcoming place to play.

“The safety risks associated with cracks and the uneven surface have limited the association’s ability to attract regional carnivals. With these barriers removed the way is clear for Armidale to reinstate itself as a regional netball juggernaut.”

“ADNA is already experiencing the pay-off of this project with an increase in player numbers, securing the hosting rights for regional events like the Northern Inland Schools Cup, and the positive impact it has had on families accessing the facility every day,” Ms Joyce said.

“With the courts finished the committee is turning its sights to the next stage of its strategic plan, securing funding to install lighting, shade, seating and the all-important clubhouse.

“Our existing amenities are also in need of updating with accessible toilets and change rooms, upgrading disabled access to courts and fencing.

“We would like to thank Adam for his support of the project and congratulate the team at Sportsbuild for an outstanding job.”