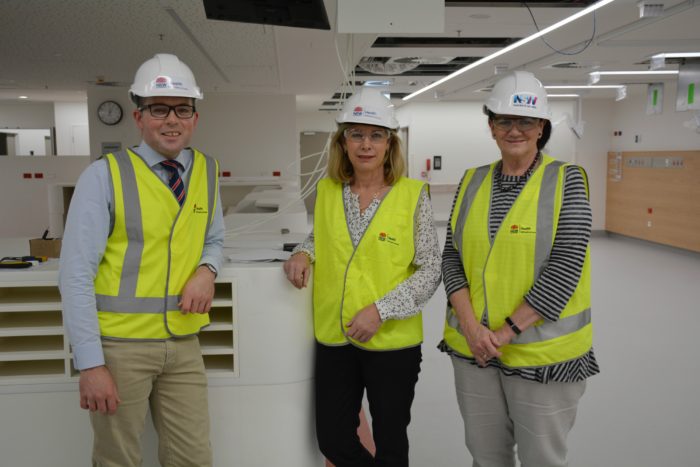 JUST over 12 months in the making, Armidale Rural Referral Hospital’s new gleaming blue brick façade is now on show, with scaffolding removed away from the new four-storey structure in preparation for the grand opening of the $60 million redevelopment early next year.

Contractors are now busy working on the building’s interior fit-out and today Member for Northern Tablelands Adam Marshall inspected the progress, giving the major health project a big thumbs up.

“It is amazing,” he said. “I knew it would be an impressive facility, but the community and hospital staff will be blown away by what they see. This truly is the future of regional healthcare.

“From the new operating theatres, to the emergency department, patient rooms and palliative care facilities, everything is more spacious, modern, comfortable and packed with the latest in technology.

“No-one wants to spend any time in hospital, but if you do, you’d want to be at Armidale – it really looks and feels that good.”

Mr Marshall praised the builders and contractors who will have “all hands on deck” for the next two months to finish the redevelopment, for the quality of the workmanship so far.

“It’s been just over a year since we broke ground, in the middle of what will soon be Armidale’s new Emergency Department,” he said. “Since October 2016, workers have poured thousands of tonnes of concrete and laid kilometres of cabling and pipe.

“This has been a monumental undertaking. The newly completed four storey building towers over Armidale and is by far the largest health infrastructure project in the Northern Tablelands.

“Now only finishing interior details like piping, electrical work and furnishing need to be completed before we open doors in a few months’ time.”

Mr Marshall said commissioning of the building would begin in January 2018.

“The new Emergency Department, operating theatres and inpatient unit each have hundreds of components that must be tested for functionality, safety and usability before staff and patients can move in,” Mr Marshall said.

“Staff will also be trained up to use the new facility to best effect and services will be incrementally brought into the building to minimise impact on patients and medical workers.

“It’s incredible to be able to talk about this project in terms of weeks, not years now. Armidale has waited for this redevelopment for the best part of a decade and it will meet the region’s health needs for decades to come.”