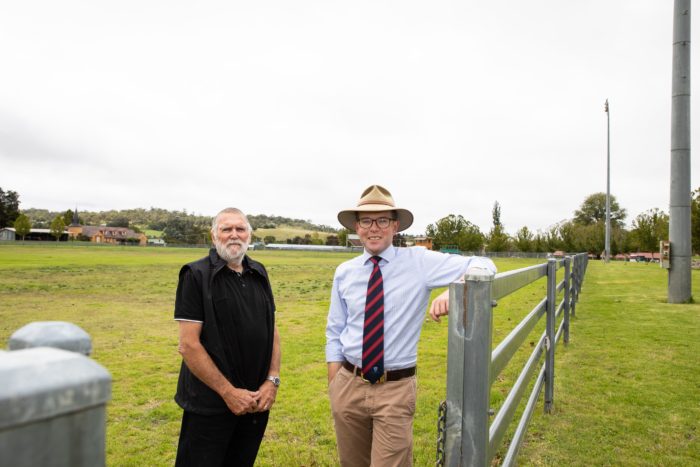 An overhaul of the arena lighting and surface at Armidale Showground will slash the venue’s electricity costs and increase its revenue, with Northern Tablelands MP Adam Marshall, right, announcing a $643,181 State Government stimulus grant alongside Chairman of the Land Managers Committee Steve Mepham.

AN overhaul of the arena lighting and surface at Armidale Showground will slash the venue’s electricity costs and increase its usage by community groups, according to Northern Tablelands MP Adam Marshall who today announced a $643,181 State Government stimulus grant for the upgrade project.

In the last 12 months, the government has provided $855,724 in stimulus and grant funding for improvements at Armidale Showground.

“Of all the assets on a showground, bright energy-efficient arena lighting is amongst the most important,” Mr Marshall said.

“The benefits of LED arena lighting are endless with increased brightness and cheaper running cost, while the bulbs tend to have a longer lifespan.

“Upgrading to LED will assist Armidale Showground to host evening community events, which in turn will generate a greater income for showground through venue hire.”

Mr Marshall said the arena surface would also be overhauled to make it safer for horses and riders.

“Over a three-year period the arena surface has been compacted to a point where equine groups have deemed it unsafe and cancelled their events,” Mr Marshall said.

“Riding groups have concerns the hard ground will bruise horse fetlocks during completion, while riders could sustain serious injuries if they are unseated.

“To address this problem the arena will be dug up and tonnes of sand mixed through to soften the ground and improve drainage.

“An agronomist will be brought in to advise the best way to rehabilitate the ground, including what surface should be sown to provide long-term, drought resistant coverage.

“With events once again filling the social calendar, land managers hope to have both projects completes by the 2022 Armidale & New England Show.

“These upgrade will complement the recently completed almost $1 million restoration of the two 120-year-old wooden grandstands at the showground.”