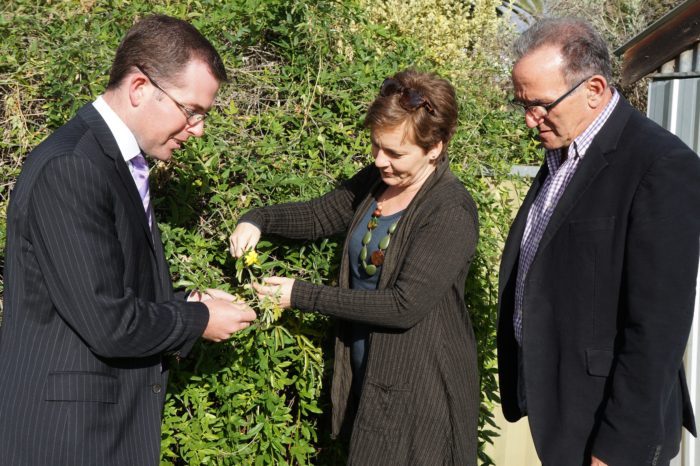 NORTHERN Tablelands MP Adam Marshall has today announced an injection of $66,000 from the NSW Government to assist Inverell Shire Council in its efforts to control invasive weeds along sections of the Dumaresq River and help restore the native fish population.

Mr Marshall was in Inverell yesterday and met with council staff to discuss their restoration and rehabilitation plans. He said the project aimed to improve recreational fishing access by controlling invasive weed infestations in the river systems.

“The project will control Cat’s Claw Creeper along a 165-kilometre section of the Dumaresq River covering an area of about 420 hectares on the NSW-Queensland border,” Mr Marshall said.

“Due to the location of the infestation, cross border collaboration is critical to addressing the issue.

“Inverell Shire Council will work in partnership with the Queensland Murray Darling Commission (QMDC) and the Inglewood-Texas Landcare Association to ensure both sides of the river is treated.

“It’s an impressive collaboration and I commend all parties on their efforts to rid the neighbourhood of this infestation.”

“The Recreational Fishing Trust – Habitat Action Grant Program is a great example of how anglers’ money is being invested back into recreational fishing, supporting the improvement of recreational fish populations,” he said.

“Approximately $35,000 has come from the NSW Environmental Trust Grant Restoration and Rehabilitation program so it’s certainly been recognised by the State government as a worthwhile project.

Inverell Shire Council Project Officer Fiona Adams said an aerial survey had been conducted by the QMDC to correctly identify the areas of infestation.

“We will be dealing with 18 landholders who will actively participate in the project and have agreed to co-fund the control of the creeper on their properties,” Mrs Adams said.

“We are lucky we all these landholders are neighbours and they are as keen as we are to rid the area of the cat’s claw. This grant will fund the initial assault on the weeds; we will employ a contractor to do that work and then years two and three of the project, the landholders will be obliged to continue monitoring and controlling the regrowth.”