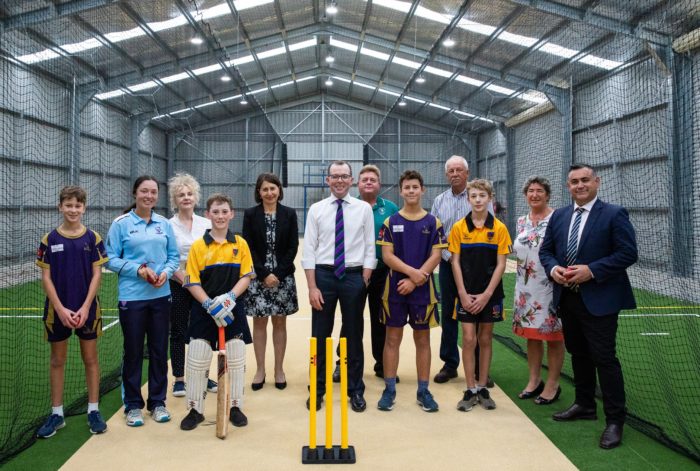 A $70,000 State Government grant has hit the final stage of the Armidale Regional Cricket Hub out of the park, by assisting the construction of the region’s only state-of-the-art indoor training facility.

Ms Berejiklian said the completion of the Armidale Regional Cricket Hub would assist the sport to grow across northern NSW.

“Once completed, the new indoor cricket training and multipurpose venue will deliver a fantastic enhancement to the Armidale Sportsground,” Ms Berejiklian said.

“I congratulate the Armidale and District Cricket Association (ADCA) on the steps it has taken to build infrastructure that makes cricket accessible to all players, all-year-round.

“It is great to see the final round of the T20 World Cup Cricket Legacy Fund deliver projects to regional communities, giving country towns the same quality facilities as those in the city and improving participation rates in the sport.”

“We know, through international cricketers like Josh Hazelwood who is from just down the road at Bendemeer, regional areas have the talent to go the distance,” Mr Barilaro said.

“This facility will increase the profile of regional cricket by allowing players and coaching staff to hone their technical skills in a world class training environment close to home.

“The addition of this building will put Armidale in the box-seat to host major representative training camps, which is a big win for the tourism industry hit hardest by COVID19.”

Mr Marshall said ADCA would use the funding to complete the building’s final fit-out.

“Stage 2 of the Regional Cricket Hub involves the addition of male and female amenities and change room facilities and inclusion of office space,” Mr Marshall said.

“A 130,000 litre water storage tank will be installed to collect water from the structure’s roof, allowing ADCA to supplement the water supply for the nearby cricket wicket area of the Sportsground.

“By completing these works, ADCA will be able to obtain the final local government approvals required to give cricketer’s full access to this important training facility.

“This will be the only indoor cricket training facility of its kind in this region and I have nothing but confidence it will be a great asset in growing and strengthening both the men’s and women’s game.”

ADCA President Mike Porter said the facility was a much-needed resource that would benefit the development of younger players.

“Our players find it difficult to train in the cold weather and this facility means we can train at all times of the year, regardless of weather,” Mr Porter said.

“This is a huge win for cricketers in the region and I can’t wait to see it come out of the ground.”

Armidale Regional Council committed $95,000 in the 2019/20 financial year via the Armidale Regional Sports Council, ADCA has contributed $20,000 and $10,000 has been committed by the Easts Cricket Club. The State Government has now provided $110,000 in total for the project.