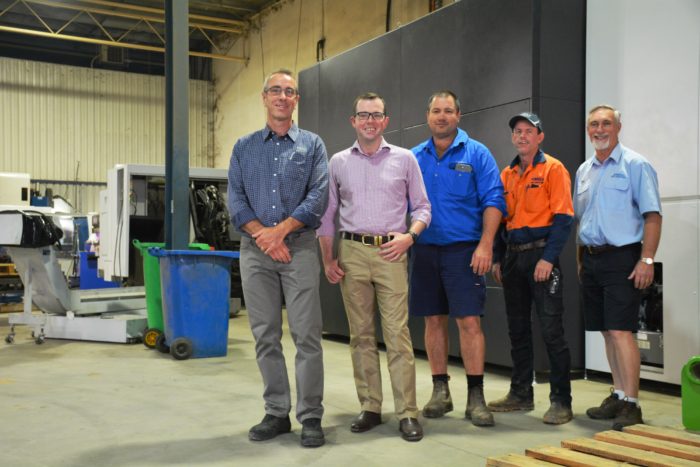 Mr Marshall was joined by Inverell Shire Mayor Paul Harmon for the announcement at Boss Engineering’s Taylor Street facility. He said the funding would support Boss’ investment in new equipment including a machining centre, a fibre laser cutter, and a shed extension, all of which will help the company increase capacity and create 47 new jobs.

“Boss Engineering has gone from strength to strength in recent years and this funding will see the business expand by a further 50 per cent, ensuring the future of local industry and jobs for the Inverell district,” Mr Marshall said.

“At a time when many claim Australian manufacturing is almost dead, Boss is bucking that trend and not only surviving, but thriving.

“This expansion will not only help Inverell’s economic development, but with Boss Engineering’s key role in supplying high-quality machinery to local industry and primary producers, the entire Northern Tablelands will feel the flow on benefits.

“Jobs for NSW is helping to drive efforts to significantly grow regional centres like Inverell to become accelerators for jobs growth and investment in the future.”

Mr Marshall said today’s good news comes on the back of 12 new employees recently hired by Boss thanks to a previous grant from the NSW Government which boosted available floor space at Boss’ plant by 25,000 square metres.

“Boss Engineering has a proven track record of using capital investment to grow Inverell’s economy, taking on dozens of qualified tradespeople and younger apprentices,” he said.

“Today’s announcement provides a reliable platform for future growth, and ensures that manufacturing will always have a home in our region.”