$77,589 FUNDING TO RAISE THE ROOF AT GLEN INNES BOWLING CLUB 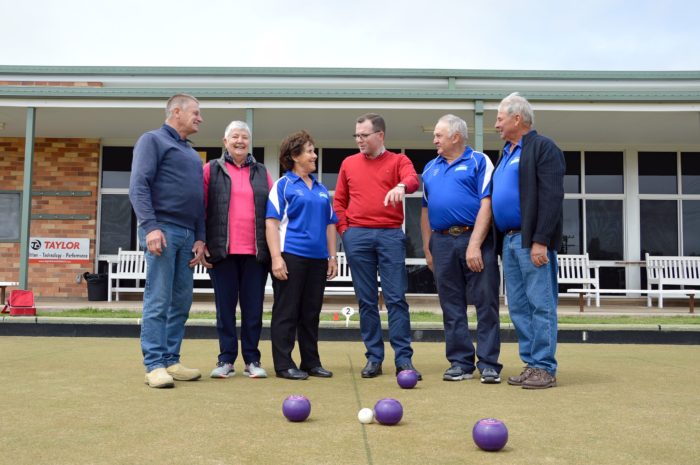 A $77,589 grant from the NSW Government grant will raise the roof of the Glen Innes Bowling Club and bowlers and club members reckon that’s a jack-high win for everyone, according to Northern Tablelands MP Adam Marshall.

Mr Marshall was in Glen Innes last week to announce the funding from the NSW Stronger Country Communities Fund and found some pretty excited locals who couldn’t wait for the work to start.

“The existing clubhouse roof has deteriorated in recent years and leaks water into the club during storms and heavy rain,” Mr Marshall said. “The grant will cover the cost of the total replacement of the roof, with one which should last decades.”

“It’s money that we just could not have raised ourselves,” Mrs Orvad said.

“Every time it rains we have to put buckets everywhere inside the club. The building was built in the 1940s and the roof needs fixing. The other day we had 20 millimetres of rain and we didn’t have enough buckets to put out, so a new roof will be very beneficial for us.”

Secretary/Manager Robert Shields said the leakage problems had led to interior issues as well, including wear and tear and damage, as well as safety concerns for the electrical wiring in the roof and ceiling.

“We’ve become accustomed to the constant leaks but addressing it now will also stop the ongoing maintenance problems and damage,” Mr Shields said.

“This club has been a focal point for a lot of people and bowls has been here a long time so this new roof is something we really need.”

Mr Marshall said the first clubhouse was built in 1919 and then extended in the 1940s, with another extension that now houses the dance floor and restaurant completed in 1967.

“It has served the sports and social community well but this upgrade with the new roof will mean it can continue to provide club members and bowlers with good amenities,” Mr Marshall said.

Mr Shields said some complementary works would be done with the roofing.

“We will talk to the builder and see what he thinks, perhaps some sort of pitched roof to replace the old iron or tin flat roof,” Mr Shields said.

“The insulation has been there since the year dot too so we will look at that as well as new wiring. This will be really be a substantial boost to the club.”

The club has up to 70 bowling members but with social memberships stands at about 1,000 and Mr Marshall said that was a significant figure a community the size of Glen Innes.