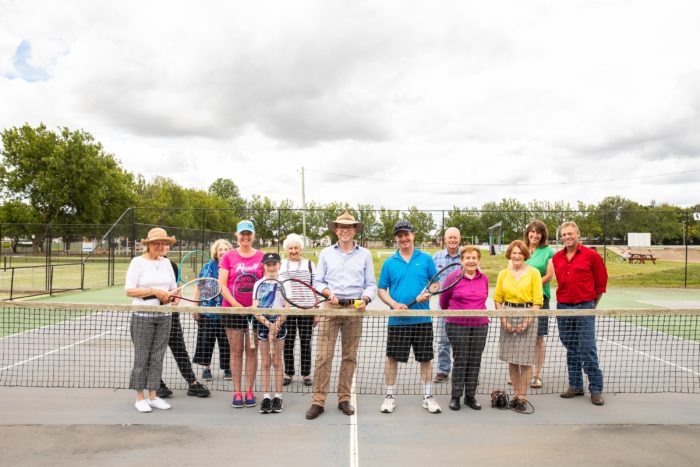 THE lights might have been switched off on Rod Laver Arena and the Australian Open for another year but at Guyra Tennis Club they are just powering up, with Northern Tablelands MP Adam Marshall today announcing a $78,794 State Government grant to improve lighting on the courts and around the clubhouse.

Mr Marshall said despite having six quality courts the facility is underutilised because of poor lighting.

“With a focus on improving safety and increasing female participation at the club, this grant will allow the installation of additional LED lights on all tennis courts at the facility.

“Currently, women mainly play social tennis on a Thursday morning, however with improved nigh playing conditions the club hopes to be able to get the numbers to establish a women’s evening competition.

“Additionally new security lighting will be added around the clubhouse and in the toilets assisting to make the facility safe and more secure after hours.

“For Guyra’s up and coming juniors who can’t get to Monday afternoon training sessions with the pro, these changes will allow night coaching and squad training. This will remove the need to travel to Armidale for sessions and night competitions.

“Coupled with the fact the new LED lights are cheaper to run, these modest improvements will definitely improve the club’s viability by encouraging new players and giving the community greater flexibility on when they can have a hit.”

“At its height our club memberships reached 120 people a year, but the drought, bushfires and COVID 19 pandemic has seen those numbers decline,” Mr Jackson said.

“LED Lighting will benefit all players and will allow us to organise more social and competition matches.

“That also goes for our local juniors who are coached and future children wishing to play at our facility.

“Lighting also for our toilets inside clubhouse is much needed, as there is none for our female players!

“Having security lights outside will help to light up safe access to clubhouse from car park, and new lighting for front of clubhouse for players and spectators visibility.

“I would like to take this opportunity to thank Adam, his staff and the State Government for helping us get this much needed grant. I, along with the committee, am very excited and looking forward to the future of tennis in Guyra with this grant!”