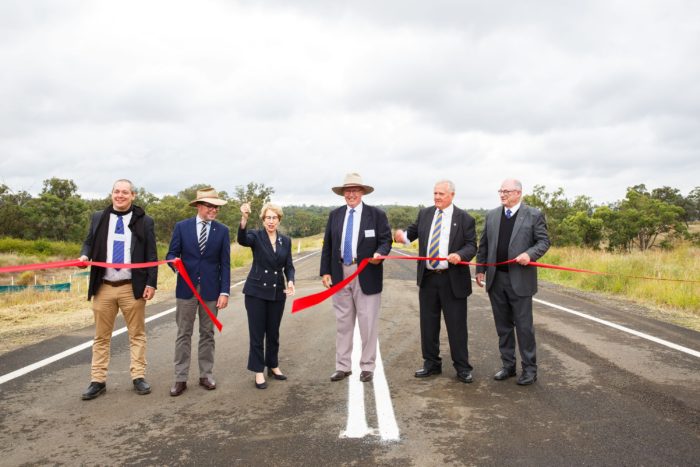 ONE of the largest infrastructure projects to be delivered in the Gwydir Shire in a generation is now complete and driving Warialda towards safer and more productive future, with Northern Tablelands MP Adam Marshall today welcoming the official opening of $8.1 million heavy vehicle bypass.

The State Government contributed more than $3 million to the development through the NSW Fixing Country Roads program, while $3.5 million was provided by the Federal Government and balance from Gwydir Shire Council and local industry.

Mr Marshall said after five years of construction it was incredible to see trucks finally travelling the road.

“This is an important day for Warialda, as a dangerous heavy vehicle pinch point in the heart of town is rubbed off the map,” Mr Marshall said.

“By bypassing the intersection of Stephen Street and Gwydir Highway, a safer more direct route has been created for high productivity freight vehicles travelling north, east and west.

“The freight pinch-point which existed was a nightmare for B-doubles to negotiate without crossing the centreline and oncoming traffic, while road trains couldn’t get around it at all.

“Now a 4.1 kilometre bypass will take heavy vehicles from the north of Warialda along a new route to the east of the township, over a new bridge on Warialda Creek and onto the Gwydir Highway – smoother, simpler and most importantly, more efficient.”

Mr Marshall congratulated council on its delivery of the project in the face of the drought, fire, floods and the pandemic.

“Once again I have to applaud the work of Gwydir Shire Council, which has delivered this massive piece of infrastructure despite and while maintaining its regular road maintenance program,” he said.

“I congratulate all involved for the professionalism and expertise they have put into making this important piece of infrastructure a reality.”

55,000 cubic metres of material, including rock and vegetation was removed to accommodate the road alignment.