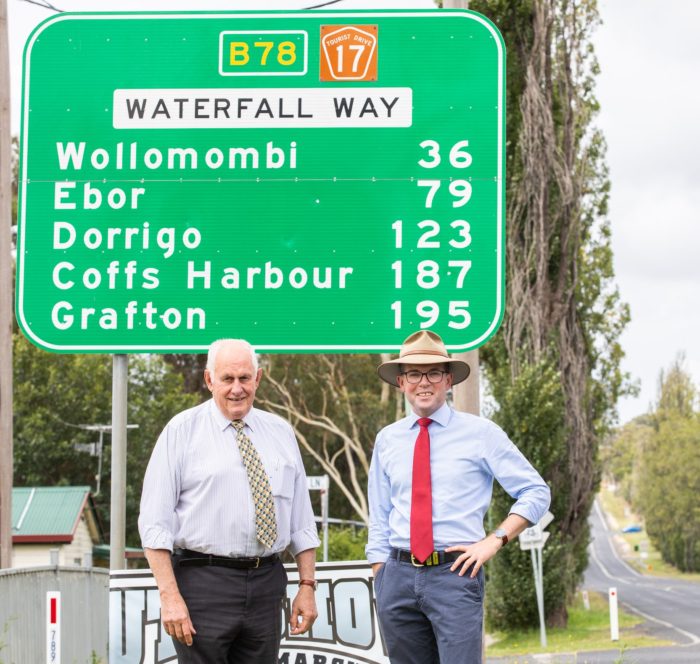 BETWEEN now and June this year $8 million will be spent upgrading the Armidale to Ebor section of Waterfall Way, with Northern Tablelands MP Adam Marshall today announcing the joint State and Federal Government funding blitz designed to reduce road trauma and save lives.

The announcement is part of a NSW road safety program which has seen $408 million allocated for 261 priority projects across the state.

Mr Marshall said over the next three months considerable improvements would be made to three sections of Waterfall Way.

“Aside from the New England Highway, Waterfall Way is one of the Armidale’s busiest roads, connecting Northern Inland residents to the Mid-North Coast,” Mr Marshall said.

“This funding injection is as timely as it is welcome, with a lot more tourist traffic now using this vital link to the coast.

“Between Armidale and Dorrigo $3 million will be spent improving the width of shoulders and installing roadside safety barriers.

“In order to prevent run-off-road incidents caused by fatigue or that foggy Ebor weather audio tactile line marking (ATLM) will be installed providing a noise (audio) and vibratory (tactile) warning to road users who have strayed from the road.

“$4 million will also be spent on similar safety improvements to a 5.3 kilometre section between Wakefield Road and Sandy Creek, while $1 million will address issues with the well-known straight and crest between Ebor Refuse Station and Pantons Gully.

“All these improvements are about ensuring travellers make it to their destination safely, and as such I encourage all motorists to obey traffic directions and drive to the conditions once roadworks have commenced.”

“As Transport for NSW gets these works underway we will be seeing well paid employment opportunities generated for local road crews.

“The safety improvements to Waterfall Way will also facilitate the smoother transfer of heavy freight and produce which is great news for industry.”

The Australian Government’s funding for the Road Safety Program is subject to ‘use it or lose it’ provisions and will deliver life-saving treatments on regional roads and to protect vulnerable road users across NSW, while also supporting local jobs and providing a welcome boost to local economies.

The ‘use it or lose it’ provisions require States and Territories to use their notionally allocated funds within a timeframe, or the funds can be reallocated to projects in other jurisdictions.

In total, the Australian Government has committed up to $300 million and the NSW Government a further $108.2 million to fund the state-wide upgrades under tranche one.