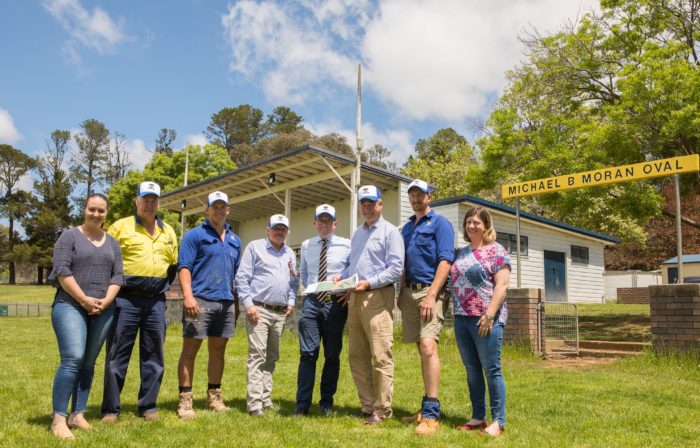 MORAN Oval in Armidale will get an $80,614 State Government grant that will make it less prone to drainage problems and improve its match playing score, Northern Tablelands MP Adam Marshall announced today.

Mr Marshall said the funding would see an improved drainage system installed that will do away with problems of the past where runoff and other rain events played havoc with the playing surface.

“Those drainage issues have often meant the two playing fields at Moran have been unplayable and that plays havoc with competition rugby and cricket and other sports that use the fields,” Mr Marshall said.

“But this grant through the Stronger Country Communities Fund will fix those headaches through building a new retaining wall and installing a new drainage system.”

Mr Marshall said Moran Oval had two rugby fields, a turf wicket, grandstand, toilets and changerooms and was used all year round.

It is owned by Armidale Regional Council but currently leased to Armidale Blues Rugby Union Football Club and also used by cricketers.

“But during heavy rain, and I know we haven’t seen much of that lately, the two playing fields which are irrigated with bore water, can become sodden to the point where they’re unusable,” Mr Marshall said.

The project aims to solve the problem by erecting a concrete retaining wall that will be 50 metres long and 1.2 metres high, including the balustrades. An improved, engineer-designed drainage system that will divert runoff from the railway lines nearby into existing drains so that it doesn’t flow onto the fields.

Armidale Regional Council Mayor Simon Murray said Moran Oval was one of the jewels in the crown of Armidale sporting facilities.

“An improved playing surface will be invaluable for the multitude of sports that use Moran Oval and many other residents who use the open space for recreation,” Cr Murray said.

“Moran Oval hosts significant regional events, attracting competitors from far and wide, so there are also economic benefits from making the facility and its playing surface more resilient to wet weather.”

Cr Murray said sports tourism was worth about $16 million to the Armidale region each year.

Mr Marshall said the works would get underway once council begins the tender process and finalised the project schedule.