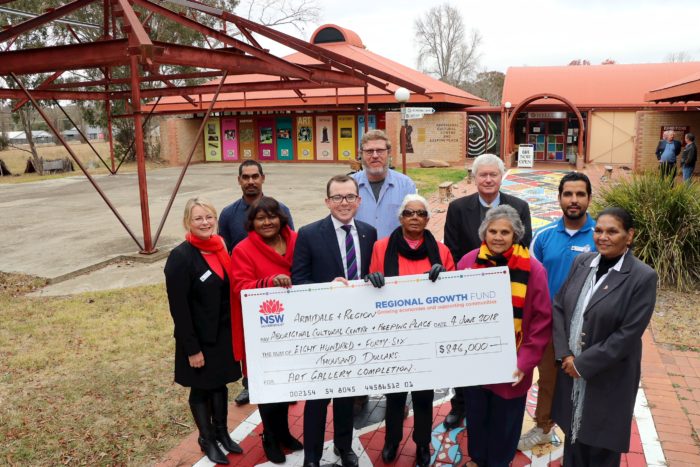 IT’S been almost 20 years in the making, but today the wait is over for the directors of the Armidale Aboriginal Cultural Centre and Keeping Place as Northern Tablelands MP Adam Marshall delivered the news of an $846,000 funding windfall to finally complete the Keeping Place’s gallery and function space.

A thrilled Mr Marshall said the premier Aboriginal cultural centre had secured the funds under the NSW Government’s Regional Cultural Fund and the project would be a major boost for indigenous art infrastructure.

“It’s a massive win for the centre and for the Aboriginal community – but it’s also an exciting development for the entire regional arts sector,” Mr Marshall said.

“The project will importantly allow the centre to complete a second gallery that will double exhibition space and boost art sales and visitor numbers.

“The centre has been operating since 1988 and is one of only a few in NSW that has grown and thrived – even though it’s been hamstrung by having only one gallery space to run exhibitions out of.

“The second gallery was originally part of the plan and the frame was built in 1999, but was never finished – but this $846,000 will complete that and bring that dream to reality.”

Dr William said construction work was planned to begin in July and be completed in time for the centre’s 30th anniversary celebrations in late November this year.

“This grant will help the Armidale Aboriginal Cultural Centre complete a half-completed gallery and build a safe car park on our grounds,” Dr William said.

“The completion of these projects will mean that we will be able to have more exhibitions, increase art sales, provide higher income for Aboriginal artists and increase our programs.”

Mr Marshall said the centre worked with some 64 Aboriginal artists and four Aboriginal art galleries across NSW but with the new gallery it would be able to expand the numbers of artists keen to exhibit their works in Armidale.

“The Armidale centre is the only fully-operating Aboriginal cultural centre in the New England and North West region so it is a significant venue for everyone,” Mr Marshall said.

“It attracts about 16,000 visits a year and $20,000 in art sales which translates to about $3.4million to the local economy and generates 15 jobs. Economic modelling suggests that could double with a second gallery.

“This project to extend its space and amenities is an exciting one and one that I’ve been working on for the past three years.”

Armidale Regional Councillor Brad Widders said confirmation of the funding was fantastic news because it was vital the region had a high-standard community facility to foster Aboriginal culture.

“The Aboriginal Cultural Centre and Keeping Place is essential as a place to gather and exhibit important information and items of Aboriginal culture but also as a safe place to keep significant relics and artefacts,” Cr Widders said.

“I remember going there as a primary school student and the impact it had on me as an Aboriginal kid.

“The improvement planned through this funding will ensure the centre and Keeping Place continue to resonate so strongly with Aboriginal community members and the wider community.”

The funding is part of the first under the NSW Government’s Regional Cultural Fund and is one of 68 projects from 12 regions across the state that is sharing in close to $50 million in first round grants.