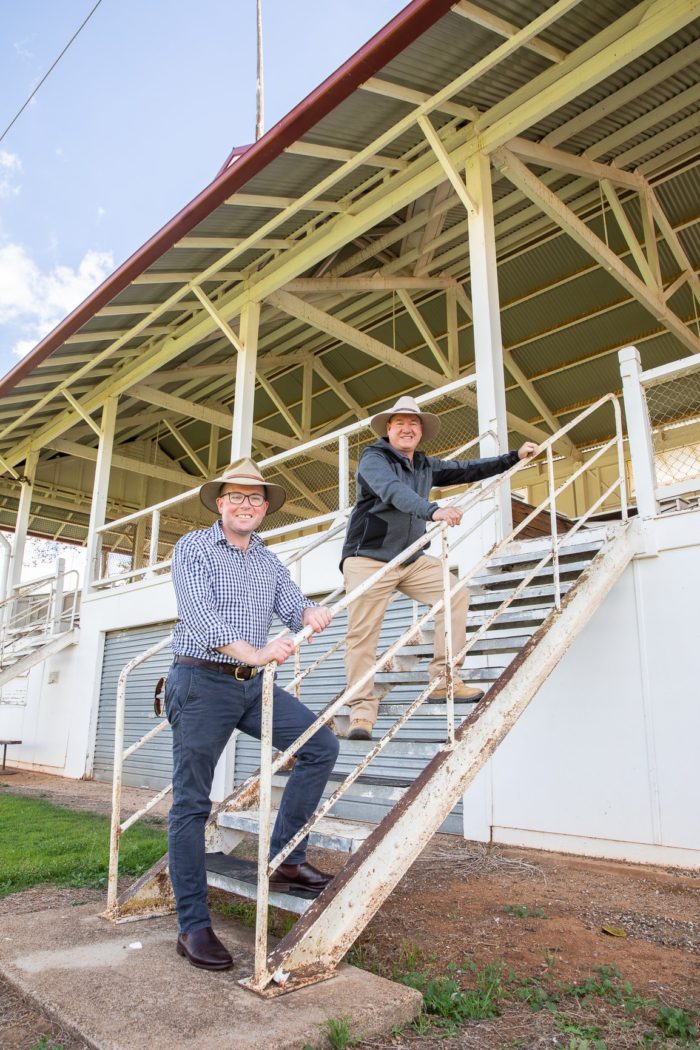 Northern Tablelands MP Adam Marshall, left, and Bingara Showground Trust’s Andrew Cooper on the steps of the grandstand which is about to be significantly upgraded.

This grant takes the total amount provided to the Bingara Showground through the Showground Stimulus Fund (SSF) to $110,718.

Mr Marshall said maintenance of the grandstand was vital for the safety of users.

“Punters, spectators and eventers have all have benefited from the bird’s-eye-view provided by the historic grandstand at Bingara Showground,” Mr Marshall said.

“With more than half-a-century under its belt the grandstand, built from large timber beams and clad in fibro sheeting, is in much need of refurbishing.

“Given the age of the building there are concerns the fibro, which currently covers the grandstand, contains asbestos.

“This project will remove and dispose of the asbestos sheeting and reclad the outside of the structure with colorbond and fibro sheeting internally.

“The inside of the building will be painted, as will the trimming.

“Gwydir Shire Council will have up to six staff working on the project, plus local electrical tradesmen.

“All materials will be purchased through local suppliers, providing further stimulus to the local economy.”

Mr Marshall said all projects at Bingara Showground funded by SSF Phase 1 had been completed.

“I commend the Bingara Showground’s Land Managers who have done an outstanding job utilising $25,340 to tick-off five individual projects across the venue,” he said.

“Using all local tradespeople the cool-room, located under the grandstand, is back running at full capacity with a new motor, while an additional awning now covers the cool-room at the polocrosse canteen.

“A number of electrical works have been undertaken with new LED spotlights installed in the main pavilion and electrical lighting and power points added in the general purpose shed.

“These improvements have all greatly increased the functionality of the showground and made it safer for its multiple user groups including Bingara Show Society, Bingara Jockey Club, Bingara Pony Club and Bingara Polocrosse Club.”