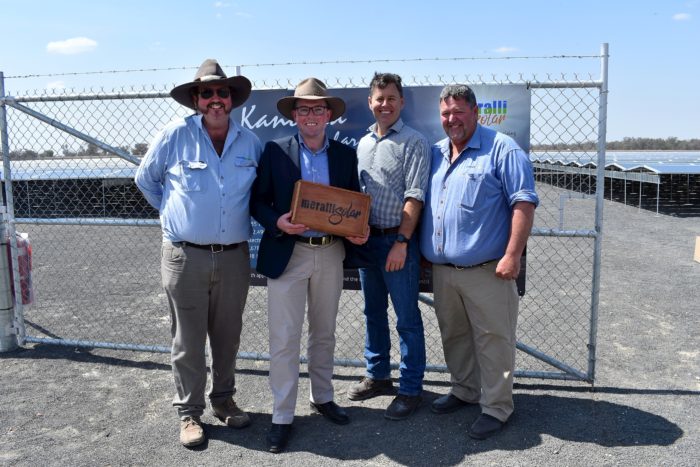 ONE of the smartest solar projects in the country has been officially switched on today with Northern Tablelands MP and Minister for Western NSW Adam Marshall opening the Kanowna Solar Farm, west of Moree.

“This solar farm is renewable energy at its absolute cutting edge and represents what the future could possibly be like right across rural and remote NSW,” Mr Marshall said.

“Due to the farms isolated location engineers have pushed the boundaries when it comes to creating new ways to store solar power and connect to the grid.

“Meralli Solar has pioneered a design and build more efficient than other manufacturers and has used innovative DC technology to maximise output and battery storage, so they are able to send power to the local grid at times of peak demand.

“It’s been an absolute privilege to attend today’s opening and experience first-hand what the future of solar energy in our region looks like.

“The farm’s almost 28,000 solar panels cover an area of almost 7 hectares, generating electricity and valuable income for the landholders, who have intelligently diversified their farming operations with this development.”

Mr Marshall said it was fantastic to see local companies like Meralli Solar pushing the boundaries and looking for new ways to keep our lights on.

“Every region should play to its strengths, and while some parts of the State help provide traditional base load power, ours is leading the way with more and more renewables projects from east to west,” Mr Marshall said.

“As a region, we can very soon enjoy the reputation as being a net-exporter of energy and turning around decades of history when we relied on other parts of the State for our power.

“I congratulate Morelli Solar on its drive to try and address some of the fundamental issues facing renewable energy companies in rural areas and it’s great to see these innovations taking place in in our region.”