$875,000 TO COMPLETE UPGRADE OF HAWTHORNE DRIVE NEAR URALLA 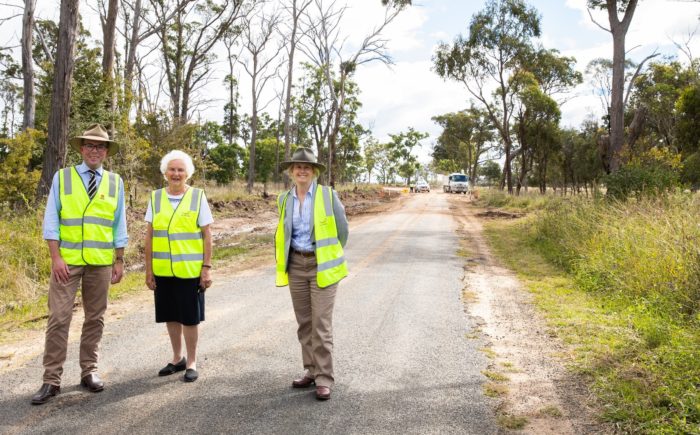 EFFORTS to improve safety and entice tourists to picturesque Hawthorne Drive in the Uralla Shire are ‘trucking along’, with Northern Tablelands MP Adam Marshall today announcing $875,000 in joint State and Commonwealth funding, through round two of the Fixing Local Roads program.

Work has now started on improvements to a two-kilometre section of Hawthorne Drive, funded by $516,000, through round one of Fixing Local Roads. This takes the total financial contribution to $1.3 million.

Mr Marshall said the program had given Uralla Shire Council the resources to improve the condition of almost the entire length of Hawthorne Drive.

“Hawthorne Drive in its current state is prone to closure due to motor vehicle accidents and flooding during heavy rain,” Mr Marshall said.

“The closure of this road is inconvenient for the many farming operations in the Rocky River area, with residents forced to take a nearly 14-kilometre detour, via Arding Road, to reach the New England Highway.

“This latest tranche of funding will be spent removing the existing seal on a 3.15 kilometre stretch of roadway and strengthening the pavement by adding additional quality road base.

“The surface will then be widened, reshaped and resealed.

“Following completion, reliability and resilience of the road network will be improved due to a stronger, smoother and more robust pavement for this section of road,” Mr Marshall said.

Uralla Shire Deputy Mayor Isabel Strutt said the project would provide a boost for the local economy through tourism and employment.

“By upgrading an additional five kilometres of Hawthorn Drive, council will improve accessibility for residents and safety for the large number of visitors who travel the scenic drive,” Cr Strutt said.

“Hawthorne Drive is a popular tourist route, with the road snaking its way through the orchards and stunning country side of Arding,” Cr Strutt said.

“With the road widened we hope more people will be enticed to drive between Arding and Rocky River, and experience all the Uralla Shire has to offer.

“Also as a result of this latest funding, seven full time equivalent jobs have been created during the construction phase, which is expected to last for 14 weeks.”

“While Hawthorne Drive is visually spectacular currently it is very windy and narrow,” Ms Jessep said.

“This has implications for heavy vehicles, in particular livestock trucks, which prefer to use the longer detour which consequently costs farmers more in transport costs.

“By reducing the potential for road closures, emergency service vehicles will have better access to the area while school students won’t have lengthy bus trips, as the bus is forced to divert.”

All successful projects will be completed within two years to ensure local communities see the benefits as quickly as possible.