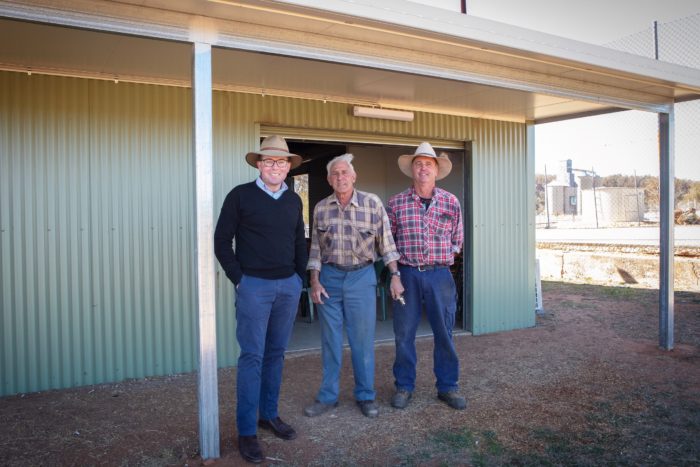 WITH the region currently in the grip of the worst drought in living memory, Northern Tablelands MP Adam Marshall has today announced a $30,000 State Government grant to support Warialda Rail Recreation Reserve in securing an ongoing water supply.

Mr Marshall met with Reserve Trust President John Riley and committee member Tim Nicolle to announce the Crown Reserves Improvement Funding, which will allow a new bore to be sunk on the grounds.

Mr Marshall said the current bore was old and no longer fit for purpose.

“For almost 50 years the existing bore, located near the club house, has provided the grounds with a stable water supply however due to its age it’s no longer providing the amount of water needed to maintain the facilities,” Mr Marshall said.

“This funding will allow for a driller to explore other bore sites on the reserve and install new infrastructure which allows the bore to be used by the club house.

Mr Marshall said with drought devastating much of the Gwydir Shire, it was important places like the recreation reserve were maintained so locals had a place to gather and socialise away from the farm.

“Last year the State Government provided $50,000 to upgrade the club house and bar area for public use,” he said

“Over the past 12 months, the club house has become residents’ local drinking hole on a Friday night, with around 20 regulars calling in for a beer and a yarn.”

“For a small community the rec grounds and club house are used nearly weekly for local functions, sport and get-togethers,” Mr Riley said.

“In recent years there has been a resurgence in young families with children moving to Warialda Rail and as a result the club house, playground equipment and cricket pitch have become a hive of activity.

“This bore is vital in keeping the taps and toilets in the club house running and the grounds up to a standard that encourages people to come along and utilise them.

“We might only be a small community but we are incredibly tight knit and I want to thank Adam and the State Government for supporting us in developing this.”