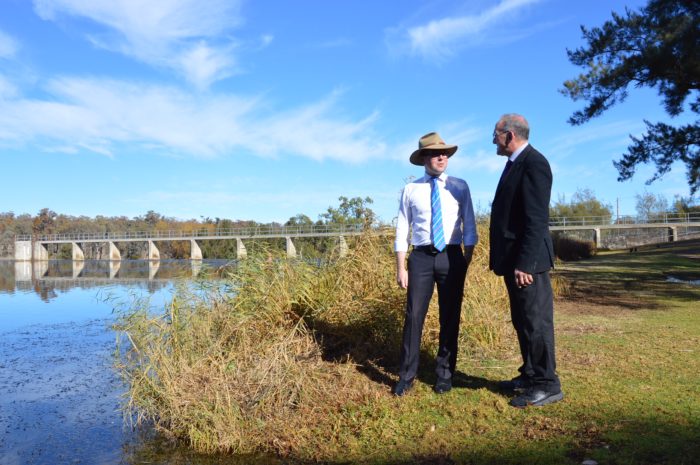 IT was formerly the Inverell township’s source of drinking water and has been a popular local recreation area for the past few decades, but now there are bold new plans to to upgrade and enhance Lake Inverell to capitalise on growing tourism opportunities.

Northern Tablelands MP Adam Marshall said Inverell Shire Council had developed a major upgrade project worth almost $882,000 to improve existing ageing facilities at the lake and construct new infrastructure to help people get out on the water, go for a bush walk or simply enjoy the serenity of the relatively well kept recreation secret.

Mr Marshall recently toured the lake area with Deputy Mayor Anthony Michael and is getting behind council’s plans to transform Lake Inverell into a must-see reserve for locals and visitors to get active on and off the water.

“Lake Inverell is loved by locals and is a peaceful picturesque area used by nearly two-thirds of Inverell residents,” Mr Marshall said.

“What was once the old water supply for the town is now a family recreation area. It’s a venue where people come to relax, bushwalk, canoe, kayak, fish or escape with their lunch. It is also used by families for picnics and birthday parties.

“Council is proposing upgrades that will retain the pristine environmental aspect Lake Inverell, but bring much needed new access and amenities to the reserve.”

Mr Marshall said he would be throwing his weight behind Council’s funding application to the State Government for $881,606 to get the works underway.

“Lake Inverell is home to a thriving canoe and kayak scene, with up to 3,000 people pushing off from the shore each year,” he said. “

Locals also conduct enviro-tourism tours around the Lake area. However, shoreline access is limited and unsafe for many people with no launching facility for small watercraft at the lake.

“There is also no dedicated ramp or vehicle access to the site or onto the Lake which is a safety concern – groups such as the SES or local Police have no real way of getting out onto the water should there be an accident.

“The walking tracks around Lake Inverell are also aged – in many parts they are overgrown and narrow. They are certainly not wide enough for two people to comfortably pass each other and are simply inadequate to handle prams and wheelchairs. The planned upgrades will create widened paths that are able to be enjoyed by families, bushwalkers, the elderly and the disabled alike.

“Part of the upgrades also includes plans for a viewing deck that will allow better views of both the Lake aspect and the old dam wall.

“The family friendly vibe will also be enhanced with new seating, informative signage highlighting the natural features and wildlife, and other recreation must-haves such as bubblers and soft fall for children.”

Mr Marshall said the importance of the Lake Inverell project to locals was immense and he congratulated Inverell Shire Council for developing a plan that struck a balance between preserving Lake Inverell’s natural beauty and updating the reserve to make it even more welcoming and accessible for Inverell residents and tourists.