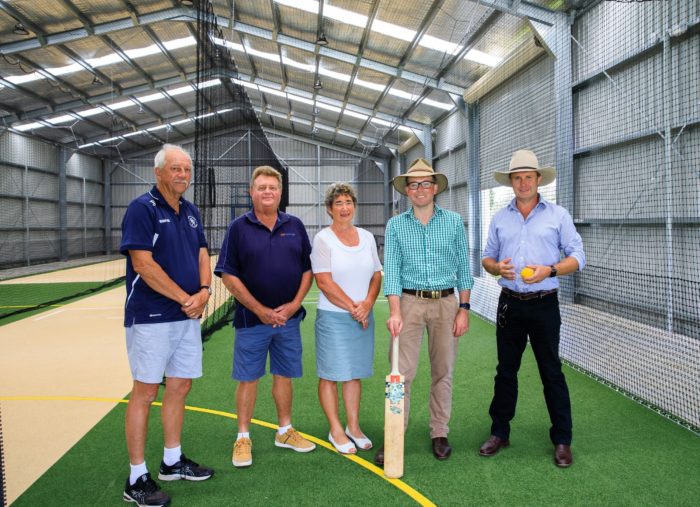 ARMIDALE District Cricket Association (ADCA) will ‘bowl over’ the final stage of the Armidale Regional Cricket Hub this year, with Northern Tablelands MP Adam Marshall today joining President Mike Porter to make the start of construction on Stage 2 and announce a further $89,000 State Government grant to complete the project.

Last year ADCA received a $70,000 grant from the T20 World Cup Cricket Legacy Fund to continue the development of the region’s only indoor training facility.

“Just like the Aussies batting a gruelling test match, ADCA’s indoor training facility has stared down a number of set-backs and is now ready to hit the final session out of the park,” an excited Mr Marshall exclaimed.

“In its current state the facility can’t be used to its full potential, requiring male and female toilets and changing facilities so it can be accessed for major coaching clinics and development days.

“This grant will provide ADCA with the full amount required to add those amenities, along with kitchen facilities and administrative space.

“Once complete this facility will put Armidale on the map for cricket development, honing the skills of up-and-coming players from across northern NSW.

“I expect in the years to come there will be many players representing our country who got their start putting in the hard yards at Armidale Regional Cricket Hub.”

ADCA President Mike Porter said the need for this state-of-the-art facility had been highlighted this summer.

“With the incredible amount of rain our region has had in recent months our local representative players have been able to continue their training regimes relatively uninterrupted as a result of this facility,” Mr Porter said.

“The next stage of works is necessary for ADCA to obtain the final local government approvals required to give cricketer’s full access to the facility.

“In coming weeks players will see work start on the new male and female amenities and change room facilities as well as office space.

“A 130,000 litre tank will be installed off the shed to harvest water which will be then recycled for use on other areas of the Sportsground.

“With this generous funding from the State Government it is my hope that by the end of March the project will be complete and close to being signed off on.

“Despite our cold New England climate this venue has made cricket a year-round sport and I am excited to see the benefits that flow for Armidale and the association as a result of that.”

Armidale Regional Council committed $95,000 in the 2019/20 financial year via the Armidale Regional Sports Council, ADCA has contributed $20,000 and $10,000 has been committed by the Easts Cricket Club. The State Government has now provided $199,000 in total for the project.