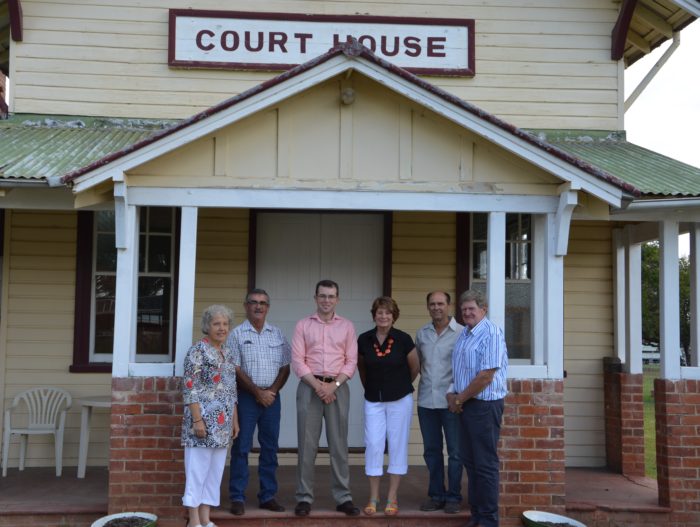 MEMBER for Northern Tablelands Adam Marshall has today announced a NSW Government grant of $9,005 for the Emmaville Community Centre Reserve Trust to allow for the continued restoration of town’s the historic former court house.

Mr Marshall toured the building recently with members of the Trust, who were looking for support from the government’s Public Reserves Management Fund.

Mr Marshall said seven Emmaville residents had been appointed trustees of the old Emmaville Court House in 2010 after they approached Glen Innes Shire Council with a plan to save and restore the building.

“Council was planning on demolishing the old court house,” he said. “It was riddled with white ants and in serious disrepair. The grounds were overgrown and in that state, it wasn’t much use to the community.

“The group was very diligent in their approach to gain trusteeship of this historically important building. They gathered more than 300 signatures from the local community which was enough to convince council that the move would be well supported.

“Since then they have worked hard to breathe new life into the building and I must commend them on their commitment and enthusiasm for this project.”

Mr Marshall said the Trustees have undertaken most of the work themselves, with the assistance of a generous local contractor who has donated his labour to the effort.

“They’ve achieved a huge amount in the past few years – the kitchen has been upgraded, the interior painted as well as some restoration work done to the windows, furniture and one of the walls, which was riddled with white ants,” he said.

“An added historical bonus is that all the court house records, dating back to 1919, are all intact and stored very safely onsite. It’s been a labour of love for the group and the next project is to paint the exterior of the building.”

Trustee Ann Fairbanks said they had a long list of jobs they were keen to get on with and were delighted they had received Mr Marshall’s support in securing the grant to paint the building.

“We didn’t want to lose such an important historical building – it’s definitely an ongoing project and we’re delighted we can get on with the next stage,” Ms Fairbanks said.