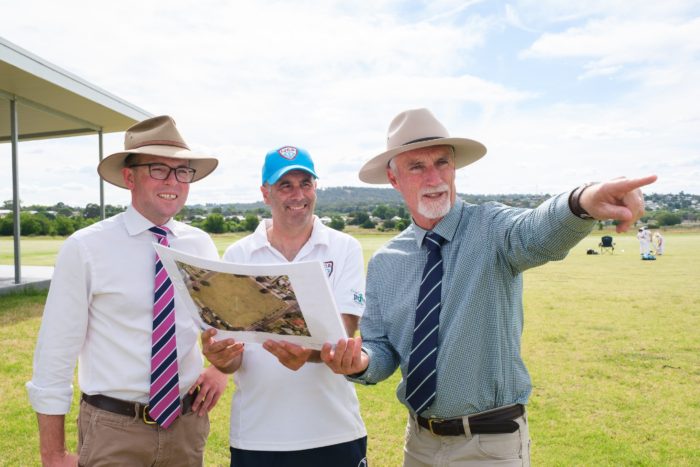 Mr Marshall said the redevelopment would improve the participation experience for junior players, officials and spectators.

“From little things big things grow and there can be no denying the impact grassroots junior country cricket has on the game at a national level,” Mr Marshall said.

“This upgrade will create the opportunity for Inverell’s junior players to hone their skills and build their confidence using the best facilities available.

“By the time the next cricket season rolls around Brooks Oval will be unrecognisable, with the installation of a white picket boundary fence, new synthetic pitch and shade trees.

“Importantly, comfort for players and spectators will be boosted with a new building providing a shaded seating area, storage room and officials’ space.

“New amenities will be included, with two male, two female and one wheelchair accessible, more than doubling the size of the existing amenities.

“The brick building will be built in a heritage style, sympathetic to the surrounding architecture, including the Presbyterian Church next door.

“This is a great example of how Inverell Shire Council and community organisations can form a winning partnership which ensures local sporting facilities are not only fit for purpose but meet the needs of users.

“It is fantastic to see the final round of the T20 World Cup Cricket Legacy Fund deliver projects to communities, giving bush cricketers better quality facilities than those in the city.”

Inverell Junior Cricket Association Secretary Peter Oliver said the upgrade would facilitate future growth in the sport for both boys and girls.

“Brooks Oval is used year-in-year-out by our junior cricketers, with over 130 children registered to play,” Mr Oliver said.

“Over the last four years our association has grown by 60 percent, this, coupled with weekly use by school groups during the cricket season, has placed pressure on the existing facilities.

“These upgrades will assist our association and community by ensuring we have a more than suitable ground which is able to meet the demands of our junior teams.”

“Work on the project will get underway on the completion of the cricket season, with local contractors undertaking the majority of the build.

“We are thrilled to have been provided this funding and thank Adam for his ongoing support.”

‘The funding for Brooks Oval is terrific news and will benefit hundreds of young cricketers in our community,” Cr Harmon said.

‘Cricket is a growing sport for young people in Inverell and this upgrade will support the future development of junior cricketers.”