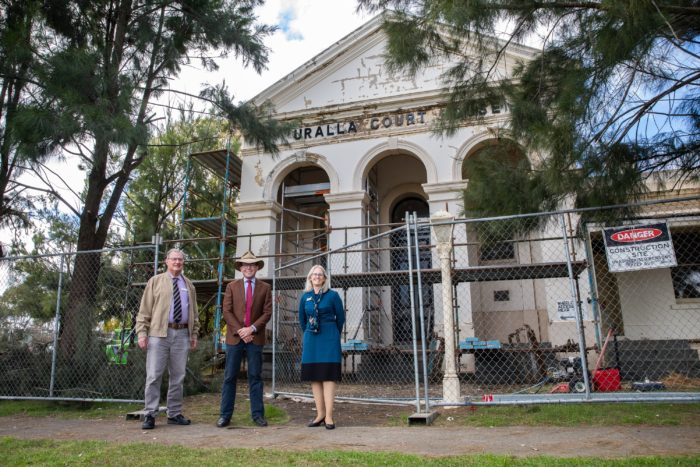 A $925,000 refurbishment which will return the historic Uralla Courthouse back to community use is now underway, with work started on the installation of a new roof, solar panels and air-conditioning, Member for Northern Tablelands announced today.

Mr Marshall said it was exciting to see the 133-year-old-building being brought back to life, utilising the funding granted to Uralla Shire Council last year.

“Uralla Courthouse has a long history serving the community, initially dispensing justice before being used as a library, community college and office for Tablelands Community Transport,” Mr Marshall said.

“For the past four to five years it has sat mostly disused and now the task of reviving the building as a community space has begun, with council repairing the old roof and sealing cracks which allowed wind and rain inside.

“Solar panels will be added to reduce the cost of powering the building, making it more affordable for those community organisations and groups which wish to utilise it in the future.

“This will also assist with powering the new reverse-cycle air-conditioning system which is to be installed.

“I commend council on the way it has gone about involving the community in the reinstatement of this important part of Uralla’s history.”

Uralla Shire Deputy Mayor Bob Crouch said decisions were still being made on how the refurbished building would be used.

“As yet, council has not resolved the final use of this grand old building, however it is likely it will be adopted as a multi-use cultural space,” Cr Crouch said.

“Council received considerable feedback to a community survey asking what the building should be used for, with arts, culture and entertainment topping the list.

“To account for this eventuation, an internal layout has been developed which includes new accessible amenities, a kitchen and bar and green room.

“The plans also see the existing unroofed outdoor area on the eastern side of the building either partially or fully covered, so that it can be used in inclement weather.

“The building will need to be repainted inside, and new carpet is needed to replace that which is weather damaged.

“Whatever its final use, I am confident residents will welcome seeing the iconic courthouse building operating in a way which enhances the economy and cultural make-up of Uralla.”