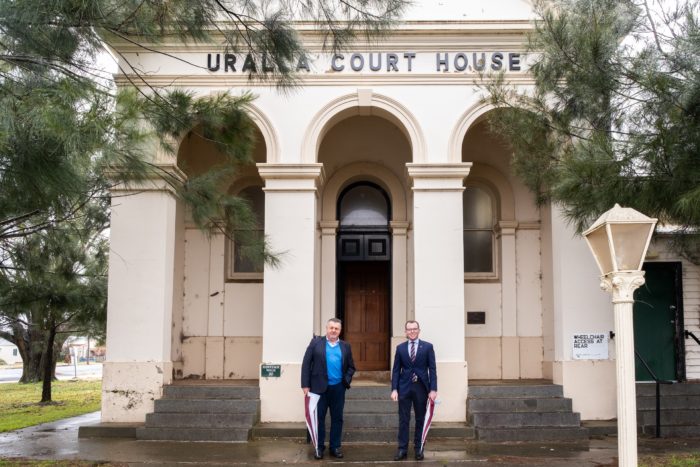 NEW office space, additional council offices or a new tourism attraction are just some of the ideas being suggested for the historic Uralla Court House, with Northern Tablelands MP Adam Marshall today announcing $925,000 will be spent restoring the 132 year-old-building for public use.

The funding has been delivered through Stage Two of the Bushfire Local Economic Recovery Fund, co-funded by the NSW and Australian Governments.

Mr Marshall said the sound of a gavel hasn’t been heard in Uralla Court House since the mid-1980s.

“Built in 1885, the grand old Uralla Courthouse is a testament to the town’s importance as a pioneering trading post and gold mining settlement,” Mr Marshall said.

“Constructed in the popular Italian architectural style of the time, the steps of the court house are made of local Uralla granite while the inside is finished with spectacular cedar paneling.

“This history is something the broader community should have the chance to experience, but considerable maintenance is needed to make it accessible and safe.

“Using this grant Uralla Shire Council will weatherproof the building by repairing the old roof and sealing cracks which allow wind and rain inside.

“Internally, asbestos will removed, the walls repainted and new furnishings added to create a functional workspace.

“Operational costs will be reduced with the installation of solar panels and energy efficient wiring and lighting.

“The Uralla Post Office was built around the same time as the courthouse and is still being utilised to this day.

“I think it will be very special for Uralla to have the courthouse back in use and contributing to the local economy.”

Uralla Shire Mayor Michael Pearce said rigorous community consultation would be undertaken before a use for the building was settled on.

“The focus with these works is to refurbish the iconic Uralla Court House and make it fit for a new purpose, whatever Council and the community determine that to be down the track,” Cr Pearce said.

“Uralla is lucky to have beautiful examples of 19th and 20th Century architecture which are showcased in the town’s heritage walk.

“Council is very appreciative of the opportunity through this grant to restore the courthouse building.

“It will be adaptive reuse – a fresh lease of life – we are unlikely to start hearing the sound of the judge’s gavel again!”