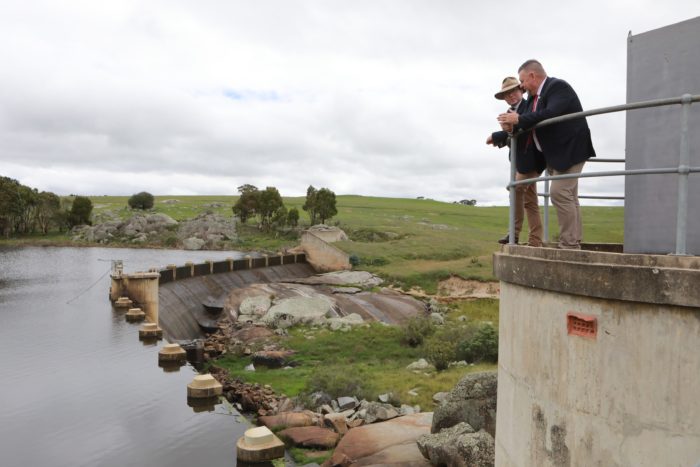 Mr Marshall said the funding would be available immediately and would come as a huge relief to council and the community, which has relied on bottled drinking water for human consumption since the late December last year.

“Uralla is known for its vibrant and thriving hospitality sector and CBD, but since December that has taken a real hit due to the water contamination issue,” Mr Marshall said.

“Since February council staff have been working with Water NSW engineers to find an appropriate solution which would bring arsenic levels back within the Australian Drinking Water Guidelines.

“At the start of the March, council initiated plans to install a Granular Activated Carbon (GAC) filter at its water treatment plant at Kentucky Creek Dam, combined with a ferric chloride pre-treatment process, as a means of tackling both organic and inorganic arsenic compounds.

“This funding, which will be made immediately available to council, will cover any costs it accrues while installing and upgrading infrastructure, meaning no added impost to ratepayers.

“The addition of GAC to Uralla’s water treatment process will not only mitigate future elevated levels of arsenic but also provide the community with cleaner, better tasting drinking water long term.”

Mr Marshall said funds had also been made available to continue providing bottled water until the issue is resolved.

“Last year I gave the commitment the State Government would cover the full cost of providing bottled water until drinkable water once again flows from the tap,” he said.

“The distribution of bottled water to Uralla residents has been a huge logistical effort for Council, which estimates the equivalent of 1.77 million 600mL bottles of drinking water have been provided to the community.

“Council has advised me recent testing of the raw water supply have shown arsenic levels have dropped significantly due to dilution following recent rain. Improvements to the treatment plant through optimising the chemical dosing have provided for treated water with arsenic levels approaching the 0.01mg/L guideline value

“Hopefully we are nearing the light at the end of the tunnel, and if water testing continues to provide positive results on a consistent and reliable basis, the ‘do not drink’ alert may be lifted by sometime in April.”