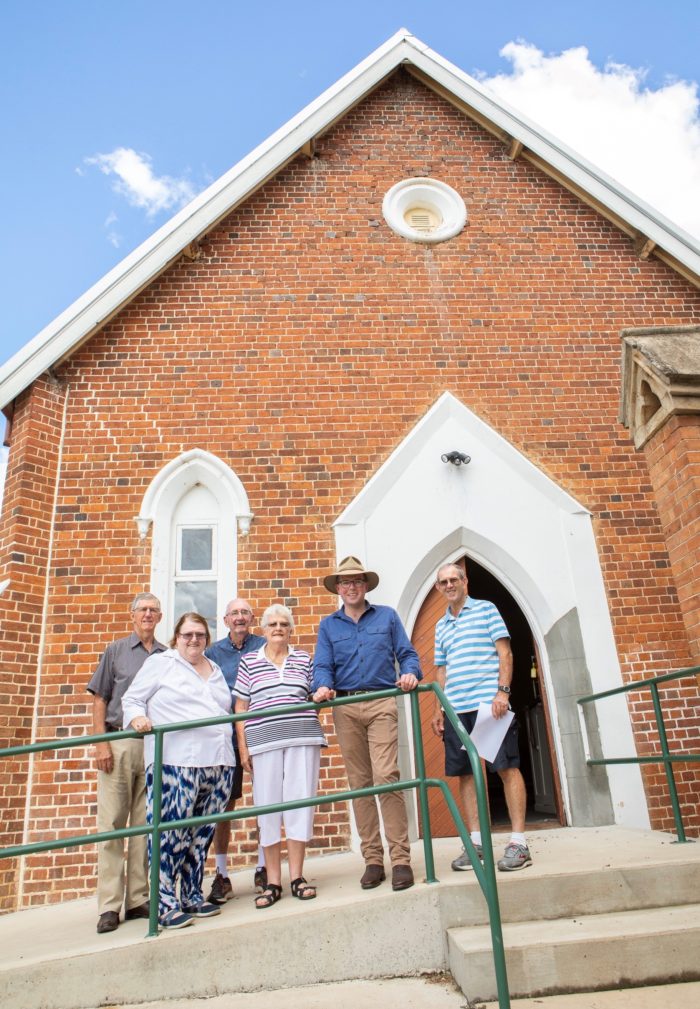 FOR a century-and-a-half the chapel at Inverell’s Uniting Church has acted as a place of worship and meeting space for the community, now the historic building is about to undergo a major restoration with the announcement of a $95,512 State Government grant by Northern Tablelands MP Adam Marshall today.

“Constructed in 1873, the chapel was Inverell’s original Methodist Church and built through a generous donation of 100 pounds,” Mr Marshall said.

“In today’s currency we are probably going to spend something similar to bring this beautifully old building back to its former glory, both inside and out.

“Initially multiple windows and doors will be pulled out and replaced to strengthen the buildings structural integrity.”

Mould and water damage have impacted parts of the chapel’s floor and ceiling, with sections of both to be replaced.

“This funding will also complete the replastering of walls which have been affected by rising damp and will construct a new outside portico, freshening up the outside façade,” Mr Marshall.

“It would have been such a shame for the community to lose this wonderful asset and I’m glad to be able to help in its restoration.”

Inverell Uniting Church volunteer Mary Saunders said the committee was fearful the dilapidated building might be condemned, if nothing was done to refurbish it.

“If the walls could talk, this chapel would tell a story of Inverell from its colonial years to the town we know and love today,” Mrs Saunders said.

“The full cost of addressing the impacts of rising damp and on the chapel’s walls is incredibly high and beyond the capabilities of our committee and we were worried if nothing was done to fix the problem the building would have to be knocked down.

“Aside from the Uniting Church, this building is used as a regular meeting place for the Myall Creek Memorial Committee as well as a venue for various school exams.

“This generous grant will complete the full restoration both internally and externally, meaning it will remain open and accessible as a community asset.

“I’m just so pleased, through this grant, the State Government has recognised the historical significance this building has to the community and I can’t thank Adam enough for supporting us in our funding application.”