$99,380 TO HELP KEEP JACK FROST OUT OF KENTUCKY MEMORIAL HALL 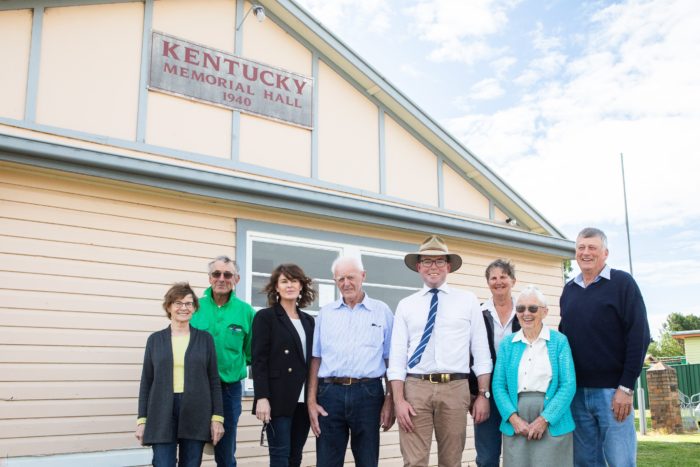 JACK Frost will no longer be a guest at Kentucky Memorial Hall with Northern Tablelands MP Adam Marshall today announcing a $99,380 State Government grant to prevent the building’s water pipes freezing in winter, keep the hall warm and to increase water security.

“In the middle of winter it gets very cold in Kentucky, with temperatures regularly dropping below zero,” Mr Marshall said.

“While a big white frost may look impressive it does little for the plumbing at the hall with the pipes and pump, which are located below the floor, quite often freezing.

“This grant will allow the area between the hall’s floor and the ground to be infilled providing protection for the pipes from the cold.

“Infilling the cavity also offers the added bonus of improving the hall’s insulation keeping it warm inside.

“Funding will also be put towards repairing leaks in the roof over the main hall and kitchen. This will increase the amount of water able to be captured in two new tanks, increasing water security at the hall during prolonged dry periods.

“The tanks will also act as a backup water supply for the Rural Fire Service during local fires.”

President of Kentucky Memorial Hall Dan Ward said fixing the roof would also help the preservation of a treasure trove of local history.

“Our grandparents and parents built the Kentucky Hall and it acts as a tribute to our pioneering past,” Mr Ward said.

“In its day Kentucky was renowned for its many apple and fruit orchards, many of which no longer exist. The Kentucky Hall is full of historic documents of that time as well as photographs of local returned service men and women.

“It’s been a priority of the hall committee to address the leaks in the roof as a means of protecting these important items from water damage.

“We would like to acknowledge Adam and the State Government for their ongoing support of our little hall.

“Raising such large amounts of money to upkeep the venue would be very difficult for us as a committee.”

Mr Marshall said the funds would also be used to give the building a fresh coat of paint.

“The Kentucky Hall is the centrepiece of the village and is utilised by a number of community groups like the mobile-preschool, Kentucky Progress Association, dancing groups and Landcare,” he said.

“Local painters have started to sand back the old boards and will repaint the building in heritage colours, ensuring it continues to be protected from the weather and looks its best for those who use it.”