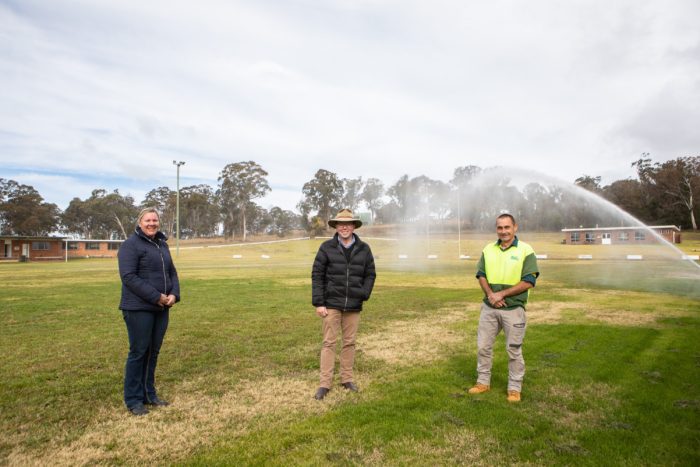 GLEN Innes’ Mead Park will be better equipped to tackle future dry spells head on after Northern Tablelands MP Adam Marshall today announced $18,920 in funding for Glen Innes Minor League to put towards the installation of a new irrigation system and water pump at the ground.

“Most seasons the biggest focus for local footy teams is how to find the try line, however the recent drought introduced a whole new ball game with clubs scrambling to find ways to keep their fields alive,” Mr Marshall said.

“This grant will ease some of that pressure on Glen Innes Rugby League, with the minor league club installing an in-ground irrigation system, connected to an existing tank via new pipes and pump.

“This will replace the old system which needed to be constantly moved by hand and was fed by a dam that dried up in the drought.

“The irrigation system will deliver Glen Innes Rugby League a safe, high-quality playing surface all year round, benefitting not only the 240 plus players across its junior and senior ranks but also opposing teams in Group 19 and school rugby league groups.

“Well done to the club on securing this funding and further improving one of the top rugby league facilities in the region.”

“Every two hours our old sprinkler system had to be moved by hand, requiring the club to establish a roster system on weekends to ensure the fields got the water they required,” Ms Bruce said.

“This added work placed pressure on our volunteer committee and I want to thank Wayne Williams for his effort in keeping the water flowing.

“For three years Wayne has also been a driving force behind the ‘new sprinkler project’, constantly fundraising and pushing for this grant funding.

“With its new change rooms and irrigation system, Mead Park will soon to be one of the best playing fields in the region.

“It is our hope as this reputation spreads Glen Innes might one day find itself hosting a NSW Rugby League event, or even a visit from the NRL.”