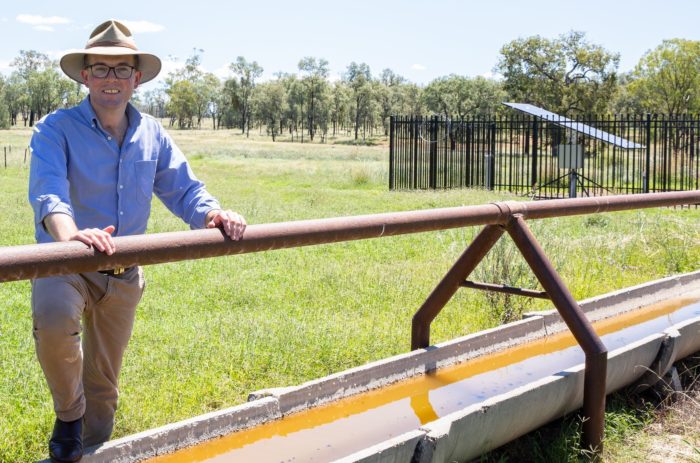 Minister for Agriculture and Member for Northern Tablelands Adam Marshall at a watering point with newly installed solar technology near Crawfords Creek.

One of Australia’s oldest traditions will benefit from new age science, with solar technology installed at watering points along the Travelling Stock Route (TSR) through the Warialda district, thanks to $127,972 in funding from the NSW Government.

Minister for Agriculture and Member for Northern Tablelands Adam Marshall today said that five large windmills had been converted into solar-powered submissible pumps to provide a more reliable source of water to drovers and their stock.

“Moving stock is hard yakka and it is crucial that graziers have safe access to a drop of water, particularly in an Australian summer,” Mr Marshall said.

“The windmills along a major north-south droving route had begun to show their age and could not provide the reliability that drovers need, so five stations on the TSR have been upgraded.

“The newly-installed solar technology now means a constant source of water at designated spots and includes security fencing to protect the new assets from livestock and allows external generators to be used if urgent pumping is required.”

More than 162,000 hectares of TSRs is managed by the North West Local Land Services, from Nundle in the east to Walgett in the west; and Goondiwindi in the north to Willow Tree in the south.

Mr Marshall said while the solar conversions would provide increased functionality of water points, it also slashed maintenance costs as well as the risks associated with the regular repair commitments needed on the old windmills.

“The State Government will continue to identify and plan solar conversions throughout the network to replace other ageing windmills,” Mr Marshall said.

“This is a great opportunity to bring what is an historic tradition and critical job in Aussie primary production into the 21st Century.”

Improving the functionality and experience for TSR users is a key objective of the NSW TSR State-Wide Plan of Management, which aims to ensure that the future TSR management aligns with Indigenous, conservation, livestock, production, recreation and community priorities.