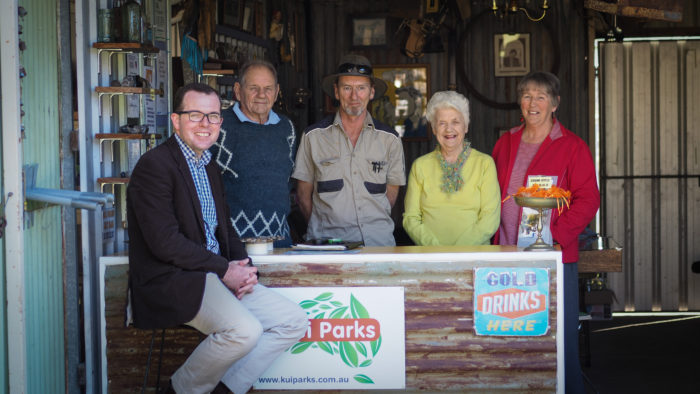 THE leaking roof of the Tingha Gems Caravan Park amenities block is finally going to be fixed, courtesy of a $2,277 grant from the NSW Government, Northern Tablelands MP Adam Marshall announced today.

“For little community-run enterprises like the Tingha Gems Caravan Park and Recreation Reserve, a leaking roof can represent a major expense that’s not easily found in reserves,” Mr Marshall said.

“That’s why it is so important that government grants like the Public Reserve Management Fund Program are there, to ensure these worthy enterprises can carry out the upgrade and maintenance work that will keep them viable.”

Mr Marshall commended the work of the caravan park’s caretaker Shaun O’Donnell whose patient care has over recent years has greatly enhanced the appearance and utility of the reserve.

“But if people are being dripped on by a leaky roof when they are in the shower or on the toilet, then the work of Shaun and his colleagues won’t be remembered by visitors, and the leak will,” Mr Marshall said.

“With a small outlay, the government can help the Tingha Caravan Park Reserve Trust fix the problem and make sure that visitors come back, which in turn increases the park’s ability to fund its own maintenance.”

Margaret Parker, secretary of the Trust, warmly welcomed the funding.

The repairs will also be done in a way that changes the building’s roof pitch to optimise the use of solar panels, a future investment that the Trust intends to make as another long-term cost-saving measure.

This funding is part of the more than $550,000 received across the Northern Tablelands the $18 million annual program of grants and loans from the NSW Government to support the development, maintenance and protection of the public reserves.