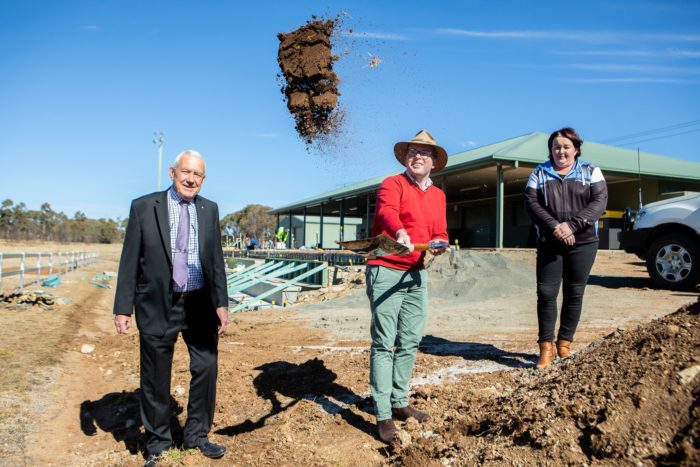 IN A year when no rugby league is being played at Guyra due to COVID-19, the construction of a new all-weather grandstand at the Guyra Sporting Complex has given supporters something to cheer about.

Mr Marshall said the new covered grandstand would seat around 300 spectators meaning they could support their team in rain, hail or shine.

“This year looked promising for Guyra Rugby League, with the club having an under 18s squad for the first time in many years, a strong turn-out for women’s league-tag and dominant men’s team – all until Group 19 made the tough decision not to go ahead with the season.

“The one benefit of no competition is that contractors can get a clear run at building this fantastic facility, which includes covered seating for 300 spectators, new lighting and safety hand rails, signage and children’s playground equipment.

“The completed grandstand will be a real game-changer for all users groups, providing spectators relief when the cold winter winds blow as well as protection from the sun in the middle of summer.”

Ms Lockyer said the grandstand was something positive the community could get behind.

“With the Guyra suffering through the worst drought in living memory last year and now COVID-19 preventing play in 2020, there really hasn’t been much opportunity to fire up the Super Spuds,” Ms Lockyer said.

“This grandstand is a real positive for the future of our game and signifies what both the senior and junior league committees are trying to achieve in making the ground all-inclusive and family friendly.

“I believe this grandstand will make the venue appealing as a place which can host regional carnivals and events, boosting the profile of local sporting clubs looking to rebuild post pandemic and injecting much needed funds into our economy.

“During the planning process our committee worked hard to ensure the build went to contractors from the Guyra and Armidale areas and are pleased to have been able to provide work to Rice Construction Group, CT Electrics, Ducat’s Earthmoving and Armidale City Signs.

“Weather permitting we anticipate the project will be complete by early September, which means it will be ready to provide shade for the cricketers should their season go ahead.

“Our plan is to officially open the grandstand in conjunction with the launch of the 2021 Rugby League season and the triumphant return of the Super Spuds.”

The grandstand has been funding by the NSW Government and Armidale Regional Council.