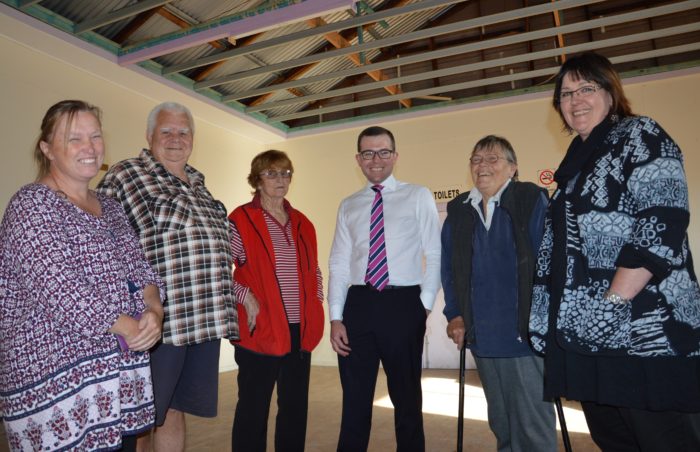 THE small but industrious board of trustees of the Gilgai Public Hall will soon be working on further improvements, according to Northern Tablelands MP Adam Marshall, who has today announced a further $4,660 in State Government funding for the hall.

Mr Marshall said the Gilgai Public Hall Trust received $28,000 through the government’s Public Reserve Management Fund (PRMF) earlier in the year to replace the hall ceiling and that this latest funding would be used to replace the hot water system and repair the footpath around the village’s war memorial.

“Sections of the hall ceiling fell in a few months ago and the trust applied for some emergency funding to have that fixed. I’m pleased to say that has been completed and they are now looking forward to sorting out their hot water system,” Mr Marshall said.

“The trust replaced the hot water heater in the men’s shower facilities about four years ago, and with this grant they can now install a new system in the female showers.

“The hall is used by the Inverell Kennel Club and it is available to community to hire for private functions.

“The community is also gearing up for a medieval festival in September and they’re also hoping to start holding seasonal markets. It’s a great way for the trust to raise funds to maintain their hall and an excellent way to bring this small community together on a regular basis.

“As is the case with most small community halls, they get used regularly and it’s important the Government provide financial support to help trustees keep them well maintained.”

Gilgai Hall Trust Chairman Han Ebbeling said quite a few improvements to the hall had been made over the years and was pleased the Trust could continue with their upgrade of the shower facilities.

“We will also be using some of the grant to replace the path that leads up to the War Memorial,” Mr Ebbeling said. “We don’t want anyone tripping over.

“We’re very pleased to receive the funding and hope to get all this finished by the end of the month.”