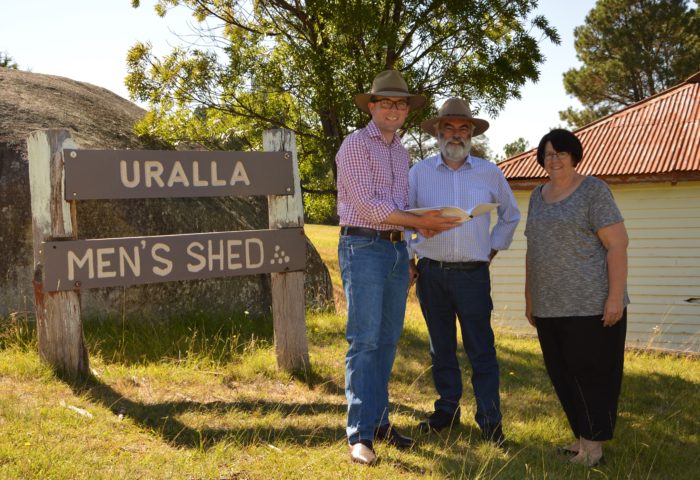 URALLA Men’s’ Shed members are feeling the love after receiving the news from Northern Tablelands MP Adam Marshall of a $6,270 grant from the State Government to make some urgent repairs to the former Uralla Scout Hall, the Men’s Shed’s new home base.

This is the second time in recent weeks the Men’s Shed has received support from the government with Mr Marshall announcing a $20,500 for the group last month to construct a new purpose-built shed to house the rapidly expanding membership and new machines.

The new shed will now be constructed adjacent to the existing former scout hall building.

“I inspected old scout hall a few weeks ago with Men’s Shed members when I was delivering the news of their $20,500 grant and a few of the serious leaks and cracks in the building were pointed out to me,” Mr Marshall said.

“A lot of electrical machinery items have been donated to the group and before they can bring it all on site and into the hall, some of this maintenance work must be completed.

“The funding is a great outcome for the Shed members as they are all very eager to get their meetings up and running and this funding will allow them to meet current safety standards.”

Mr Marshall said he was happy to lend his support to the Uralla Men’s Shed and pleased the State Government was able to step up and provide the emergency funding for the repairs.

Uralla Men’s Shed President Gordon Stewart was delighted to receive the news and said the group was very grateful for all the support they were receiving from the State Government.

“The plumbing needs some urgent attention and we’d also like to do some work on the electrical wiring. We just need to make some decisions as to which job needs doing first,” Mr Gordon said.

“We’re just delighted we’ve had this help, it’s very encouraging when you know you have this sort of support.”