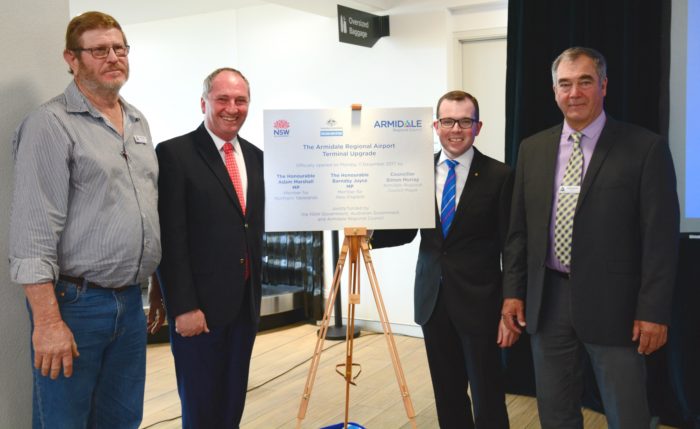 ARMIDALE Regional Airport’s $10.5 million terminal expansion is officially open for business, with the complete overhaul now treating Christmas jetsetters to a spectacular view well before their flight leaves the tarmac.

“As Australia’s highest city, Armidale has long had a passion and dedication for aviation – and now it has an airport it can rightly be proud of,” Mr Marshall said.

“With the new terminal’s stunning architecture, breathtaking structural wooden beams and floor to ceiling glass; returning visitors could be forgiven for thinking they’d touched down in Sydney.

“Supported by $8.05 million in NSW Government funding, these functional and attractive upgrades will ensure the comfort and safety of visitors exploring our beautiful region, and locals traveling for work or pleasure.”

Mr Marshall said that the terminal redevelopment would be quickly followed with upgrades to airside infrastructure, kick-started with $1.5 million in NSW Government support.

“While the terminal may be shiny and functional – upgrades to tarmac and the aircraft apron are just as important to ensure that the airport can keep up with anticipated growth,” Mr Marshall said.

“Close to 140,000 passengers will use Armidale Regional Airport this year – and these upgrades will support 200,000 visitors boarding 4,500 flights in less than a decade.

“Investment in regional air infrastructure is essential not only to give visitors an excellent first impression, but to attract further investment in our regional centres and encourage new air services to service our communities.

Mr Marshall also announced today that a new $3.2 million roundabout on the New England Highway would now proceed to construction, providing a new access for the airport as well the industrial and commercial subdivisions on either side of the highway.

The NSW and Commonwealth Governments have each contributed $1 million to this project to match Armidale Regional Council’s $1.2 million.

“Council has also just applied for another $5 million from the NSW Government’s Regional Growth Fund to activate the first stage of its subdivision, which has already attracted significant interest from investors,” Mr Marshall said.

“I am strongly supporting this application because this project will create new jobs and business activity in this region, something I am passionate about and the number one priority for the community.

“This is on the back of investment from government, the likes of which has never been seen in Armidale in health, education and other critical infrastructure.

“This place has the best chance it has ever had in its history to finally realise its enormous potential. The stars are aligning and all we have to do is grab that opportunity and run with it!”