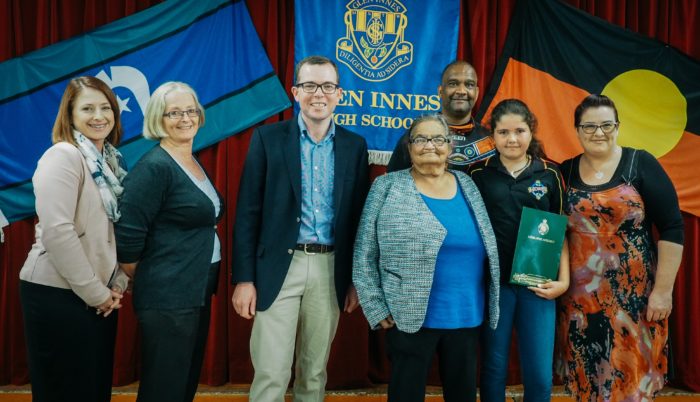 Mr Marshall presented the promising student with her award in front of her peers at a school assembly late last week.

“Alkira is both a great student and a cultural ambassador,” Mr Marshall said.

“She contributes in the classroom and without. She is an active member of the Glen Innes community, contributing to cultural performances and regularly giving the ‘Welcome to Country’ greeting at school and community events.”

“Alkira is strongly connected to her culture and heritage and promotes reconciliation through her actions and her ‘let’s get on with it’ attitude, which she applies to schoolwork, sports and her wider community involvement.”

As recognition of her achievements, Alkira has received a certificate and a book store gift voucher.

Mr Marshall also announced that Alkira was selected as one of the top 20 Aboriginal students across the state and has been invited to Sydney in early August to attend and emerging leaders forum, where she will meet with Aboriginal, business and government leaders.

“This is an enormous honour and recognition of Alkira’s attitude towards her school, peers and her culture,” Mr Marshall said.

“The Aboriginal Student of the Year award highlights the outstanding contributions that young leaders are making in their local communities across the State,” Mrs Williams said.