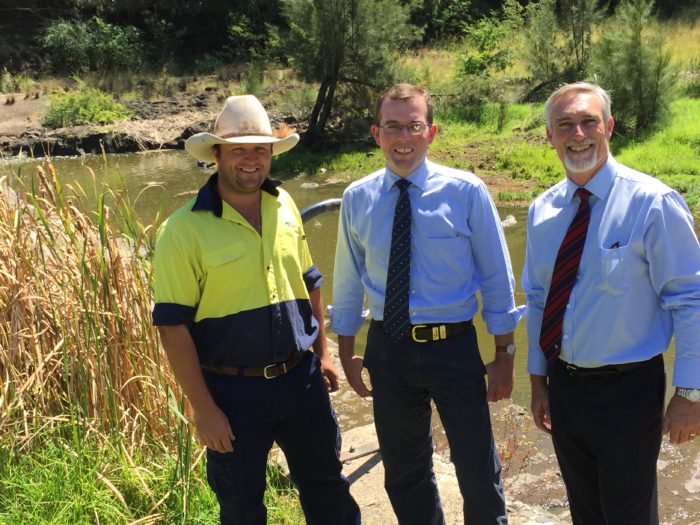 NORTHERN Tablelands MP Adam Marshall has announced an injection of $48,953 of State Government funding to assist Inverell Shire Council’s efforts to control invasive weeds along sections of the Macintyre and Dumaresq Rivers and restore the native fish population.

Mr Marshall made the announcement in Inverell late last week while inspecting the site of the weed infestation in the Macintyre River.

“This year the NSW Government’s Habitat Action Grant Program was highly competitive with 60 applications submitted across the State so I’d like to commend the Inverell Shire Council on its successful application and wish them well in their work to restore these habitats.”

“Cat’s Claw Creeper in the Dumaresq catchment near Bonshaw will be targeted and involve a NSW-Queensland cross-border collaboration with council, community and private landholders across 165 km of riparian land,” he said.

“The second project in the Macintyre Border Rivers Catchment will be stage one of a two stage project to remove heavy infestations of exotic invasive weed species along 1.5 km of the Macintyre riverbank from the Inverell Weir to Ring Street Bridge.

“Removal of the weed species will allow native plant species to naturally regenerate.”

“The Recreational Fishing Trust – Habitat Action Grant Program is a great example of how anglers’ money is being invested back into recreational fishing, supporting the improvement of recreational fish populations,” he said.

Inverell Shire Council Weeds officer Sam Gorton said in recent years there had been a steady increase in the prevalence of exotic weed species along the McIntyre River in Inverell.

“Seed and vegetation from these exotic species also lead to oxygen depletion of the waterway, potentially causing death of fish species.

“Council, together with Local Land Services, developed a River Plan which examined problems along the river, solutions and established an action plan for dealing with sites in order of priority.”