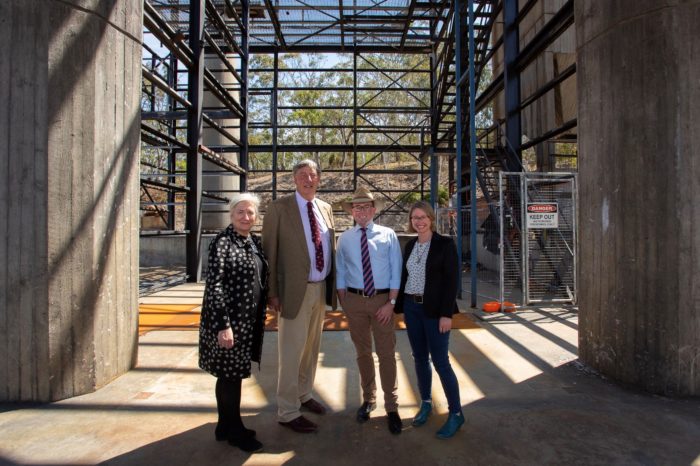 UNE wants to transform the disused boilerhouse building into a state-of-the-art play-based learning centre for students across the region. In preparation, UNE has fully decommissioned and cleaned up the site.

“In its day the boilerhouse was an engineering wonder, which not only heated the entire university but won awards for its architectural design,” Mr Marshall said.

“Last year UNE began repurposing the 80-year-old building so it could once more inspire, by delivering a Questacon experience right here in Armidale with augmented reality, interactive science spaces and play equipment.

“The Boilerhouse Project will enhance the Armidale’s standing as an education destination bringing economic benefits to the entire region. This is why I’ll be fighting my hardest to get it over the line.”

Professor Heywood said the Boilerhouse Project was an exciting component in the existing Discovery Precinct which would provide educational experiences for young people.

“The Boilerhouse project has been designed to inspire a love of learning in children from an early age,” Professor Heywood said.

“Our dream is to provide educational tourism to visitors from far and wide with an experience which sparks their curiosity, grows their confidence and ignites their imagination.

“UNE has the opportunity to provide all the building blocks for state-of-the-art immersive facilities that are enabling rural and remote communities with expertise in science, technology, engineering, arts and mathematics.”

Dr Abbott added there was no facility akin to the Boilerhouse Project in northern NSW which encouraged children at an early age to problem solve through innovation and play.

“UNE Discovery has worked hard to retain the historical aspects of the building and incorporating its industrial design into play pieces like climbing frames,” Dr Abbott said.

“I thank Adam for his ongoing support of what we are trying to achieve with this beautiful old building.”