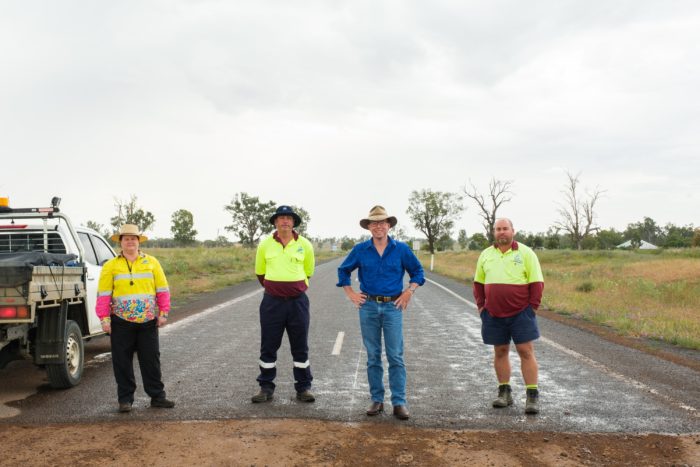 “Because of this significant investment, council has fast-tracked its proposed rural road sealing program by two years,” Mr Marshall said.

“Almost six kilometres of Terry Hie Hie Road, between Mellburra Road and the shire boundary, is now fully sealed with work about to start on the second 5.5 kilometre stretch.

“The sealing covered by this latest funding injection is scheduled to start in April next year and expected to take five months to complete.

“This will be very welcome news for the 11 property owners along Terry Hie Hie Road and the 90 to 120 vehicles which travel it daily.

“Motorists are already experiencing the benefits of bitumen seal with improved wet weather access and reduced wear and tear on vehicles.

“The road is also safer with an eight-metre wide seal and line marking meaning people have more road to manoeuvre.

“The success of this project will see Terry Hie Hie Road as an alternative to the Newell Highway, providing a direct and quick route between Moree and Tamworth.

“The economic benefits of this outcome are huge as the road becomes the journey of choice for travelling grey-nomads and agricultural freight feeding into the Moree Special Activation Precinct.”

Mr Marshall said the end of the road was literally in-sight, with only 4.86 kilometres left to fund.

“Council is racing to have the entire seal complete by the end of 2024,” he said.

“It is likely around $1 million is still needed to get this the final section over the finish line and I am committed to working with the Deputy Premier and Minister for Regional Roads to have that secured.

“I congratulate council for almost ticking off two of its highest priority road projects, being the recently opened $15 million Carrigan Road upgrade and now the Terry Hie Hie Road seal.”