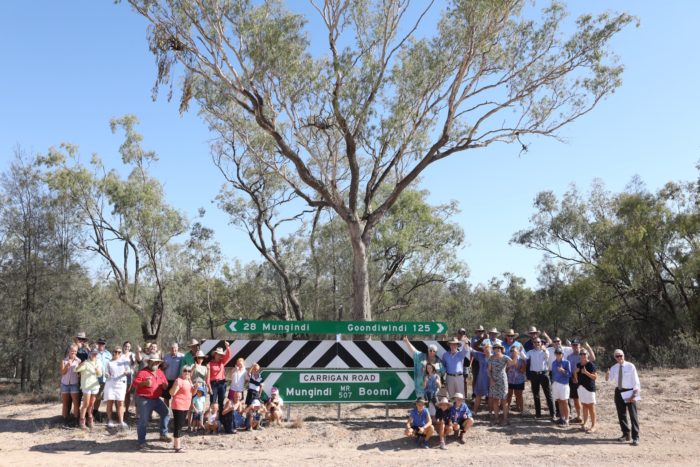 IT’S something many long-time locals never thought they would live to see, but now they definitely will, according to Northern Tablelands MP Adam Marshall, who today announced a further $10.5 million from the State Government to widen and seal the remaining 58 kilometres of gravel on the vital freight route Carrigan Road, between Boomi and Mungindi.

“No one ever thought there’d be a day when we could say that Carrigan Road is bitumen all the way, but that day will now definitely come and come very soon with this extra funding,” an elated Mr Marshall said today.

In June last year, as part of the 2018-19 NSW Budget, Mr Marshall announced what he described as the ‘first downpayment’ of $3.5 million for the $14 million project.

“Since then, Moree Plains Shire Council has cracked on with the road works, already sealing almost seven kilometres of the first 14-kilometre stretch,” he said.

“This extra $10.5 million means council now has the funds to widen and seal the entire length of the road between Boomi and Mungindi – a massive achievement that has been beyond the reach of council and the community for around 25 years.”

Mr Marshall was joined on Carrigan Road, otherwise known as Main Road 507, this morning by Moree Plains Shire Mayor Katrina Humphries, Councillor Sue Price, herself a resident on the road, and a large crowd of excited locals for the historic announcement.

“This a significant freight route for local producers and the Moree Plains Shire and the headaches caused by costs of gravel re-sheeting and closures during the wet will soon be a thing of the past,” Mr Marshall said.

“Projects like these mean a lot to the local communities and those who live and operate their businesses on these important roads.

“More than $30 million of agricultural produce, on average, is transported off properties along Carrigan Road and out to market each year.

“Having year-round and all-weather access will save local producers millions and also ensure the school bus can run every day and emergency service vehicles can access every property as well.

“I’m thrilled with this additional money as this road is absolutely critical to the productivity of Moree and Boomi/Mungindi areas.

Mr Marshall said local farmers and Moree Plains Shire Council had been pushing for the sealing of this road for around 25 years.

“This route isn’t just an outback track, it now supports tens of thousands of freight movements each year but is gravel and is out of action every time it rains,” he said.

“One business alone on this road can account for almost 2,000 truck movements annually. Another lost count at 500, so this road is crucial and seeing it sealed has been a goal of both mine and Moree Plains Shire Council.

“This has been a team effort between locals, council and me and that’s why we have been successful and why I am so grateful to everyone for their efforts.”

In May last year, Mr Marshall took Roads Minister Melinda Pavey along Carrigan Road to meet with locals and see the state of the road personally.

“I’m delighted that together with Moree Plains Shire Council and the local community, our advocacy has got this crucial and long-sought-after project across the line,” Mr Marshall said.

“Now we have the money to provide the safe and effective road infrastructure that locals have desperately needed and deserved for years.”

Mr Marshall paid tribute to council, especially Mayor Katrina Humphries and Councillor Sue Price, for its advocacy and support to secure the funding.

“Sue Price has been like a dog with a bone on this project for years,” Mr Marshall said.

“She’s never let go and always pushed so hard at every turn, supported by Katrina, for this project to be prioritised and funded. The Mungindi and Boomi communities are very fortunate to have Sue fighting for them.”