ANOTHER $10,000 IN BLAZEAID SUPPORT TO HELP TINGHA FIRE FARMERS 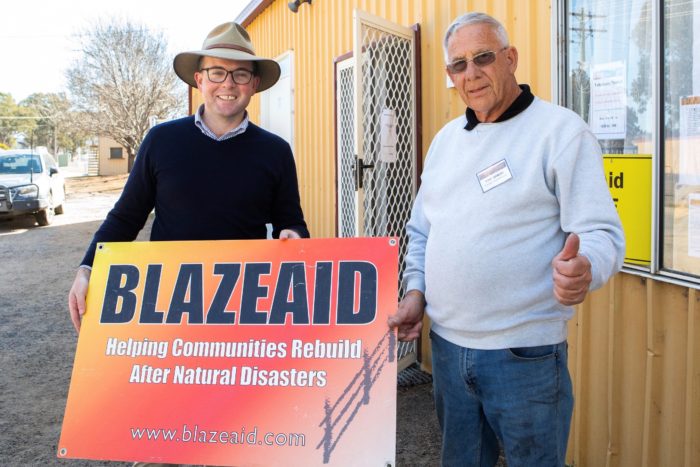 Mr Marshall said BlazeAid would now remain in Tingha for a month than originally planned to complete fencing projects on 14 remaining properties. In June, Mr Marshall and Deputy Premier John Barilaro presented BlazeAid with a cheque for $5,000 to assist them purchase more fencing materials and this new funding would be used the same way again.

“BlazeAid has already helped restore fencing on 45 properties in and around Tingha and this extra funding will allow them to finish of the 14 remaining properties, along with other local donations,” Mr Marshall said.

“The work that these volunteers are doing is amazing and these people are legends – giving their own time and expertise to help those in need.

“Six months after the devastating fire, these men and women are still working away, helping farmers with fencing projects that would otherwise not have been completed for months, if not years.

Mr Marshall said more than 68 kilometres of new boundary fencing had already Ben completed by BlazeAid volunteers, saving local farmers hundreds of thousands of dollars in time and materials, a reminder to everyone of the incredible recovery effort which has taken place.

“Initially BlazeAid was expecting to pack up its camp at Inverell Showground in August however in recent weeks there has been a run of new projects come online which volunteers want to finish and this extra funding will help with that,” Mr Marshall said.

“To date BlazeAid Camp Co-ordinator Tony Samuel and his team have completed 45 fencing projects across Tingha, Gilgai and Inverell with another dozen still to finish before the camp closes in September.

“Supporting our fire and drought ravaged farmers has been a community effort and I want to personally thank Inverell’s business houses which have provided ongoing financial support to BlazeAid in recent months.”

Mr Samuel said the five-month clean-up had been a challenging but humbling experience.

“Since the camp first opened at Inverell Showground in March, BlazeAid has seen more than 160 volunteers from across as far as Western Australia and Tasmania lend a hand,” Mr Samuel said.

“While we are proud of the number of jobs which have been completed sadly we are still getting about two new landholders a week calling in and asking if we can send a team out to help them.

“I expect we will continue providing support and accepting jobs until a week before we pack the camp up and I urge landholders in need to please make contact with us.”