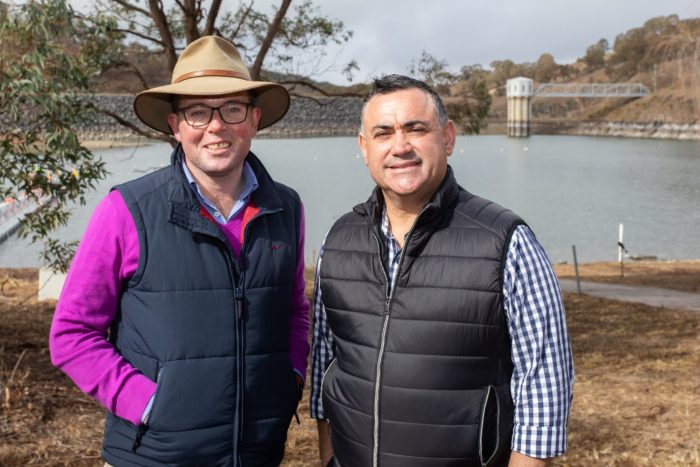 NORTHERN Tablelands MP Adam Marshall has today announced a further $5.77 million from the State Government to support the design and construction of an emergency water pipeline from the decommissioned Puddledock Dam to Armidale’s water treatment plant.

Mr Marshal said he and the State Government was taking every step possible to ensure water continued flowing from the taps of every resident in the region.

“The Malpas Dam to Guyra pipeline has officially been handed over to Armidale Regional Council by the contractors and is now pumping up to 60 litres of water per second to the Guyra water treatment plant,” Mr Marshall said.

“Now the State Government has set its site on providing Armidale with access to emergency water by supporting Council in the construction of a water pipeline from Puddledock Dam to the city.

“This infrastructure will be a fall back for when the main pipeline to Malpas Dam is turned off for maintenance or there is an algae bloom in the water storage, ensuring continued supply.

“Since Puddledock Dam was decommissioned in 1968 it has only been used as an emergency water supply but with drought conditions continuing it may soon be called on to play a larger role.”

Mr Marshall said it’s now time for the Federal Government to cough up its share of water infrastructure funding.

“The NSW Government has provided more than $43 million for important water projects across the Northern Tablelands over the past three years,” Mr Marshall said.

“With the proposed raising of Malpas Dam wall, doubling its current capacity, estimated to cost around $70 million, I would hope the Commonwealth could support this critical development.

“If we can double the dam’s capacity to 26,000 megalitres by raising the wall by five metres, Malpas Dam would be transformed into a regional water storage.

Council has informed me it will soon request tenders for detailed concept designs for the project with an expectation for those to be complete in the first quarter of 2020.”

Cr Murray said the completion of the pipeline was a significant achievement for the region and has provided a lifeline to the Guyra community during these unprecedented drought conditions.

“The pipeline was always conceived as an emergency backup for Guyra and wasn’t expected to be used 100 per cent of the time,” Cr Murray said.

“Through the determination and foresight of Adam, the NSW Government and Council to secure the funding so quickly, we are now reaping the rewards and the Guyra township has access to the Armidale region’s main water supply.

“The trucks have now stopped and all of Guyra’s water is coming via the pipeline, providing vital household treated water to the community.

“Our focus now for the entire Armidale region is to save water and avoid our day zero in just over 400 days. Every drop we conserve now means we prolong a date with day zero.”