ANOTHER JEWEL IN THE CROWN FOR INVERELL LAPIDARY CLUB 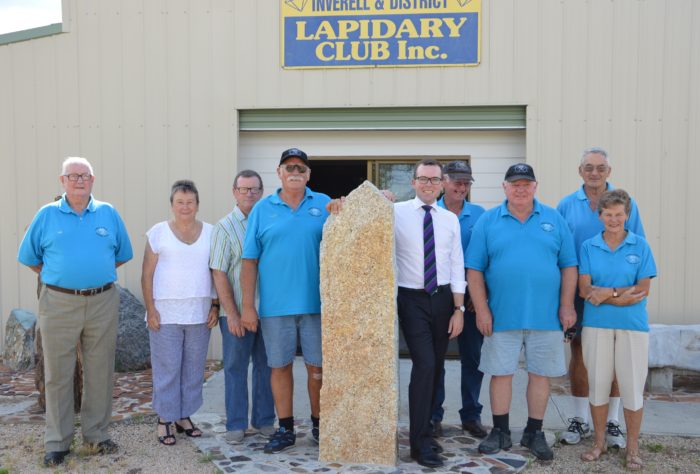 A STATE Government grant of almost $19,000 will enable the Inverell Lapidary Club to double its showroom and workshop areas to show off more of the riches of one of the richest mining belts in the world to more visitors, says Northern Tablelands MP Adam Marshall.

The club in McIlveen Street in Inverell says it will use the funding to extend its clubhouse building to provide a faceting room, a bigger training section, more display and presentation areas and extra storage space to meet tourist and local demands.

Mr Marshall said the grant of $18,970 will effectively allow the club, which has been going for nearly 55 years and is one of the oldest in Australia, to showcase more of its gems and workmanship and expand its space to cater for a greater and bigger audience.

“The club is part of a tourism cluster but its present building size of 150 square metres floor space is cramped and inadequate for the activities the members want to organize,” Mr Marshall said.

The local MP delivered a real Eureka moment with a yuletide gift this week in announcing the successful grant funding to club members.

“The funding will allow the club to double their floor space and give them the opportunity to expand what they do best – show off some of this region’s rich resource gems in a better light and importantly provide an enhanced tourist experience,” Mr Marshall said.

“The club rightly sits on the Fossickers Way and this area is part of the richest mining belt in the world. The amount of minerals and gem stones that have in the past been found here – and mined extensively in earlier days – still attracts wide interest and some of that history and heritage is on show because of the club.

“They see more than 5000 visitors a year but they’ve been constrained in building on that interest and so this funding will let them extend demonstration and come-and-try events for visitors who want to really explore the personal experience of faceting and playing with gem stones.

“Inverell is the Sapphire City and sapphires hold a great fascination for tourists but there’s also grass stones, rutile and quartz crystals and other minerals on show, and some old timers still say there’s more tin still in the ground than was ever mined in the early days, so that continues to attract thousands of people to this area.”

Club secretary Ross Provis said fossickers still descended on the area in their thousands and while you might still be able to pick something precious up out of a creek, most had to be prepared to work a little bit harder for a gemstone.

“But you might only have to go down a metre or so and it was only a month or so ago that a young couple pulled out some particularly good crystals, smoky quartz crystals and no, it wasn’t enough to buy a house or car, but it was a pretty good find and made their holiday,” Mr Provis said.

That practical experience in handling stones is in demand by plenty of tourists and locals alike, including school students and community groups, according to Mr Marshall.

“There’s considerable demand for things like that so the extensions will allow the club to put on more training programs, host workshops and courses and have some come-and-try days where visitors and more school groups can learn some of the rudimentary things about lapidary work,” Mr Marshall said.

“And it will also allow them to increase their catering capacity.”

Mr Marshall said the club hoped to get straight down to business with the building extension and hoped it might be ready for opening in February – ahead of its major event and major fundraiser, the Inverell Gem and craft Show, which has been going for 40 years.