ANOTHER JEWEL IN THE CROWN OF INVERELL LAPIDARY CLUB REVEALED 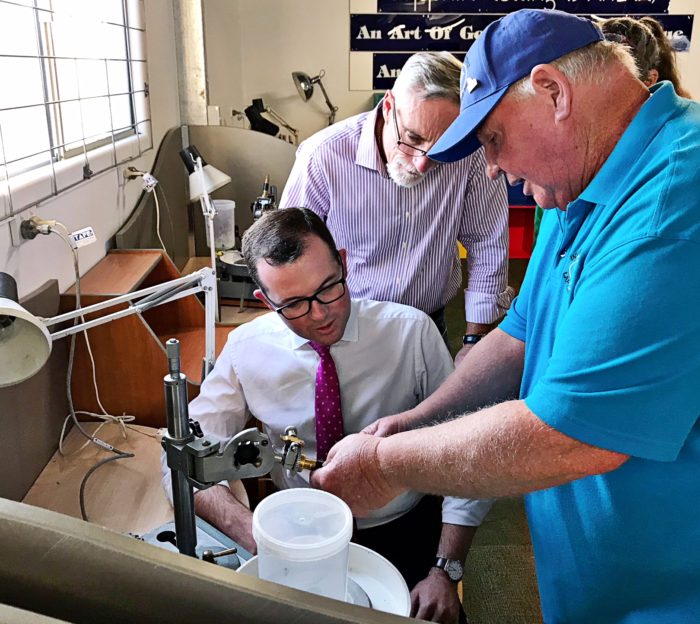 Funded by the NSW Government and the club, with the assistance of Inverell Shire Council, the second building on the McIlveen Street site doubles the growing club’s showroom and workshop areas to show off more of the gems of one of the richest mining belts in the world to more visitors.

“The club rightly sits on the Fossickers Way and this area is part of the richest mining belt in the world.

“The amount of minerals and gem stones that have in the past been found here – and mined extensively in earlier days – still attracts wide interest and some of that history and heritage is on show because of the club.

Mr Marshall announced a grant of almost $19,000 from the NSW Government earlier this year for the club, which has been going for nearly 55 years and is one of the oldest in Australia, to showcase more of its gems and workmanship and expand its space to cater for a greater and bigger audience.

The local MP also arranged for 13 disused TAFE NSW faceting machines to be delivered to the club to be used in the new building.

“This expanded centre will allow the club to do what is does best – show off some of this region’s rich resource gems in a better light and importantly provide an enhanced tourist experience,” Mr Marshall said.

“They see more than 5,000 visitors a year but they’ve been constrained in building and now expanded, the centre will let the club extend demonstration and come-and-try events for visitors who want to really explore the personal experience of faceting and playing with gem stones.”