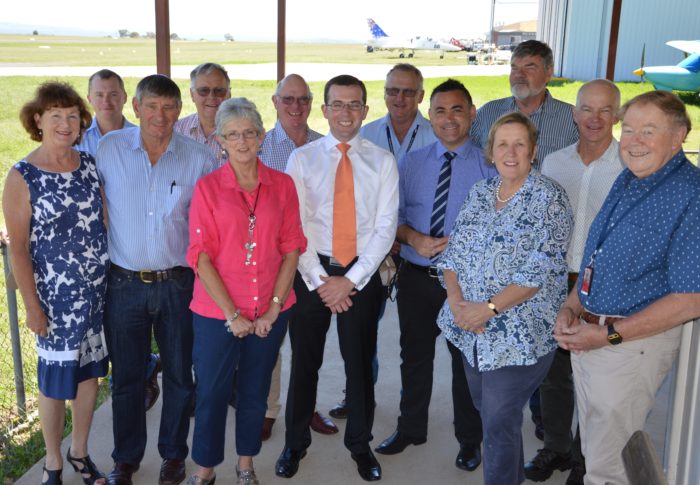 ARMIDALE Aero Club members are looking forward to getting on with the job of undertaking a much-needed upgrade of their club house after receiving a grant of almost $20,000 from the NSW Government’s Community Building Partnership (CBP) program today.

Member for Northern Tablelands Adam Marshall and the Minister for Small Business and Regional Tourism John Barilaro, who is touring the region, delivered the good news to club members this morning at the Armidale Regional Airport.

“The CBP program grants play a vital role in helping community groups maintain and improve their facilities so I was very pleased to be able to support the Aero Club in its bid for this funding,” Mr Barilaro said.

“The club was initially formed not long after the end of the Second World War and has a long and proud history. The current club house was built in 1976 and while club members have worked hard to up keep the building, it’s certainly in need of some repairs and maintenance.”

In announcing the funding today Mr Marshall said the club’s kitchen was renovated about three years ago and this new project would see the facia boards on the exterior of the club house repaired and painted, new signage erected and a ramp and special doorway constructed for disabled access.

“This upgrade will improve the ability of the club to host functions and events for its members but also the many pilots from across NSW and Australia who land in Armidale,” Mr Marshall said.

“Additionally, this upgrade is timely given the large air show event being planned for the airport this November.”

Mr Marshall said around 25 members used the club’s Cessna 172 on a regular basis to keep their pilot’s licences current and several members had their own aircraft and participate in a monthly flying competition.

“There are also a few members who have a commercial licence and they need to have three take offs and landings a month to keep them current. It’s a very active club and I know they’ll use these funds wisely to improve their facilities.”

Armidale Aero Club committee member Tony Gall said the club had put a lot of hard work into fund raising over the years to maintain their facilities so they appreciated the helping hand from the NSW Government.

“This grant is certainly very welcome and we are looking forward to getting on with the upgrade,” Mr Gall said. “We are part of the airport users group and have a few members on the committee which is staging the Auto and Air Spectacular in November so we are keen to have those renovations done by then.

“The next job will be to upgrade our amenities, build a concrete floor for the hangar and put doors on it to keep out the animals and provide better protection for the plane.”