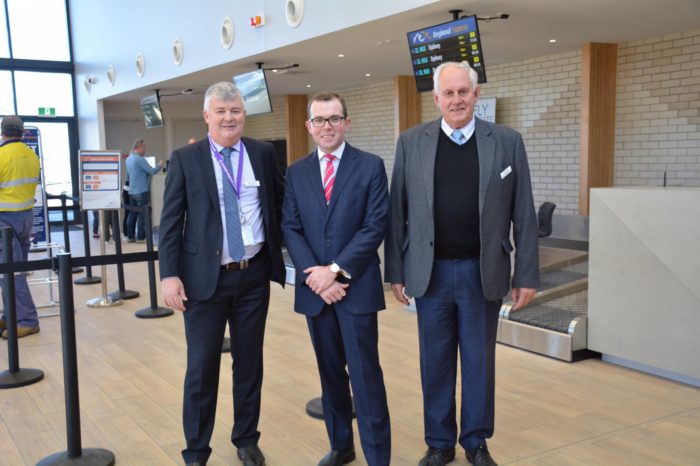 JETSETTERS using Armidale Regional Airport will have noticed a new approach to travelling, with departure and check in facilities transitioning into the brand new facility over the weekend.

“This $9.42 million upgrade provided a much better first impression for visitors to our region, and it will even blow established passengers away,” Mr Marshall said.

“With floor to ceiling glass, structural wood beams and stone check in desks, it’s a highly polished aesthetic that will better reflect the natural beauty of our region.

“With refurbishments now underway on the older half of the terminal and the airstrip, it will be a completely different airport by the end of the year.”

All works are expected to be completed in the next four months – allowing airlines and rental car services to expand. Talks are ongoing with the major carriers, who are looking to provide a VIP passenger lounge for their frequent flyers.

“I commend airport staff and Armidale Regional Council for ensuring this transition period is quick and painless. Flights are leaving from the new terminal building with minimal inconvenience for passengers and flight crews,” Mr Marshall said.

Mr Marshall said the upgrades weren’t just aesthetic – but provide a significant boost to services for one of the state’s most utilised airports.

“Our airport sees some 140,000 passenger movements per year – which considering its smaller catchment area, means it’s attracting passengers at a greater rate than larger hubs like Tamworth,” he said.

“In addition to raising the capacity to 200,000 passengers per year, airstrip upgrades will mean that incoming flights aren’t bottlenecked by plane movements on the tarmac. This will mean fewer delays when many flights are taking off and landing within just a few minutes of each other.

“When a secure departure area is complete, we’ll be able to attract larger, more efficient planes as well.”

“When these upgrades are complete, I hope to see Armidale follow Dubbo’s lead – pursuing direct flights to other major destinations like Newcastle, Melbourne or Adelaide,” he said.

“When complete in the next few months, this redevelopment will be indistinguishable from the old Armidale Regional Airport, and further cement its position as the best way to get to Brisbane or Sydney.”

The State Government has provided $8 million for the redevelopment.