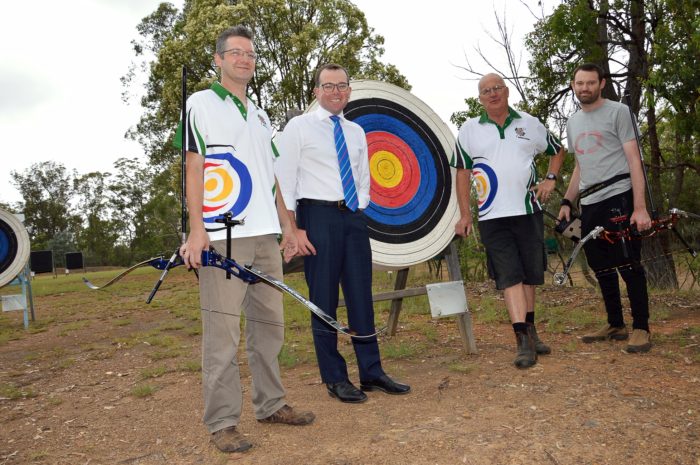 THE Armidale Archers Club says a small grant announced today by Northern Tablelands MP Adam Marshall will hit the mark in their aim to upgrade security at their home base.

Mr Marshall delivered news that the New England archery master has won a $1,085 grant for security cameras at the Rockvale Road home.

Mr Marshall said the club had sought the funding to provide a better security system with a weatherproof solar system to safeguard club equipment and the amenities at the archery field.

“They’ve had a couple of break ins in the past two years with vandals destroying a lot of beginner’s course equipment, so the cameras hopefully will be a big deterrent and prevent any future break ins,” Mr Marshall said.

“I was proud to deliver a $7,000 funding grant to the club not long ago, so they could build an amenities block and that was very important to them, so this grant actually protects that investment and that asset for them as well.”

Dr Laurenson said discussions were underway about just where the cameras would be located but they will hope to have one set looking at the clubhouse and equipment container, another sighted on the archery range and perhaps another one or two targeting the access road to the field off Rockvale Road.

Mr Marshall said the club hoped to have the new security system set up soon and tested, well ahead of the range hosting the 2019 Archery National Youth Championships from next April 11 to 18.

Dr Laurenson said that title shoot would see about 120 competitors.

The Armidale field is set on 25 acres or 10 hectares and provides for two archery disciplines in recurve bow shooting – or the Olympic competition discipline – and the bigger, more modern cousin, compound archery, with the grounds allowing for a maximum 90 metre shoot, right back to the five metre category.

“The Armidale Archers are a small, family friendly club, and they’ve been around for over 50 years. Today there’s about 40 members, but it is seeing a good healthy growth in numbers,” Mr Marshall said.

“And it actually hits the bullseye when it comes to bigger honours, it shoots well above its weight, there’s been state and national champions come out of this club and plenty of archers who’ve even competed internationally.

“They’ve hosted quite a few big events, and last September pulled off a stellar state championships for the annual field event, with over 70 competitors, from as far as Canberra and Brisbane joining 10 locals.”

“They deserve some money to protect that reputation and the sporting equipment of the members and visitors with upgraded eyes-on-the grounds.”